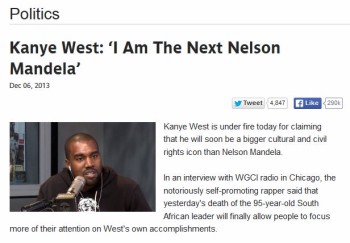 Two African news outlets were hoaxed by a Daily Currant satire story claiming that Kanye West said he would be the “next Nelson Mandela.”

At least two news outlets were duped. A simple fact check to the “about us” page on The Currant’s website would have clued them in that “The Daily Currant is an English language online satirical newspaper.”

South Africa’s Times Live has since deleted its story. But a Google search shows the headline on the Times Live website (below). iMediaEthics was unable to find a cached version of the article.

BuzzFeed also captured Times Live’s tweet about its story on the West comments.

Kenya’s The Standard also was duped. Its Dec. 7 story, “Kanye West: ‘I am  the Next Nelson Mandela'” was still published on its website as of 4 PM.

The  story reads in part:

“In an interview with WGCI radio in Chicago, the notoriously self-promoting rapper said that the death of the 95-year-old South African leader will finally allow people to focus more of their attention on West’s own accomplishments.

“‘I am the next Nelson Mandela,’ West responded. ‘I’m only 36 years old, and when I look at everything I’ve accomplished, it’s the only comparison that makes any sense. By the time I’m 95, I’m going to be a bigger hero than he ever was.'”

The Standard article was sourced to the UK Metro. iMediaEthics is writing to the Metro to ask why it is listed as the source.

Ugh. I’ve been Paris Hilton’d! These Kanye quotes are made up! http://t.co/9ROLiWQieU Grrrrrrrr. Sorry to Kanye.

In May, the Drudge Report was hoaxed by the Daily Currant’s satire story saying a pizzeria would only let NYC mayor Mike Bloomberg have one slice of pizza. Polish magazine Wprost fell for a Daily Currant story saying Sarah Palin wanted President Barack Obama to invade the Czech Republic.

And in February, the Washington Post fell for one of the Daily Currant’s stories saying that Sarah Palin joined Al Jazeera.