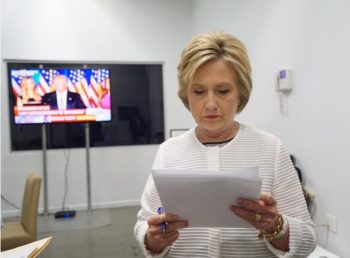 Was it fair to report that Hillary Clinton clinched the Democratic presidential nomination before several states including California and New Jersey voted last week?

The ombudsmen for National Public Radio and PBS agreed it was necessary to report that news to their audience. The Associated Press broke the news and stood by its decision as well.

The Associated Press issued its own June 6 statement about its reporting. “Clinton is now the ‘presumptive nominee,’ because according to our count, she now has enough delegates backing her candidacy to win the nomination,” the statement read in part.

AP editor-in-chief Kathleen Carroll added that “we counted” the delegates and superdelegates, which led to its reporting. “That is news, and reporting the news is what we do. Nothing in that discourages or prevents voters in six states from exercising their right to go to the polls today and cast their ballots.”

NPR’s Elizabeth Jensen addressed complaints from listeners and readers who accused NPR of being “unprofessional, “ethically bankrupt” and more.

“My view is that just because superdelegates could change their minds does not mean that NPR should not report their current stance, assuming NPR trusts that the AP’s reporting is solid. There is no reason to think it is not,” Jensen wrote. She noted that since there is a chance superdelegates could flip their vote, NPR is calling Clinton the “presumptive” nominee.

“If the superdelegates change their public allegiances to the point where Clinton’s nomination seems in trouble, I have no doubt that NPR will report that,” Jensen wrote.

Further, Jensen argued that it was necessary to report the news no matter when it happens because it is news. For hypothetical purposes, she offered:

“What if it had been Sanders who clinched under the same circumstances as Clinton and NPR did not report it? Or if NPR had knowledge of a story that was unfavorable to Clinton and held off reporting it, again in order not to influence the elections taking place Tuesday? Voters — Sanders’ supporters — would have rightly called foul.”

Like NPR’s Jensen, PBS’s ombudsman Michael Getler pointed to the reputation and credibility of the Associated Press’ reporting when covering the news.

“It needs to be understood that The Associated Press is a cornerstone of American journalism, a highly-respected, trusted and diligent recorder and reporter of news that we all depend on,” Getler reminded.

On a personal level as a reader, Getler commented he was “dismayed” and concerned the news would “affect the turnout for both candidates and therefore interfere with a pure expression of voter sentiment.”

But, on the other hand, “As a newspaper reporter and editor for many decades, I always operated on the principle that it was always best to publish as soon as the story was nailed down and ready; not to hold things,” Getler wrote.

So, he said if he were working “in a newsroom, I would do what the AP did.”