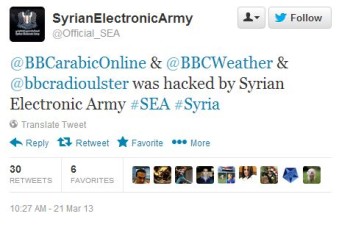 Hacking group the Syrian Electronic Army claimed responsibility for the hack and for posting the tweets which the BBC characterized as “unacceptable,” according to the AP.  One of the tweets posted was “Long Live Syria Al-Assad.”

According to a tweet posted by the Syrian Electronic Army, the group hacked the following accounts: @BBCArabicOnline, @BBCWeather, and @BBCRadioUlster.