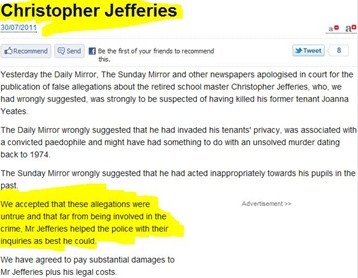 UK’s High Court fined two UK newspapers for contempt of court over their reporting on the murder of Jo Yeates, the BBC reported.

An “early suspect” in Yeates’ murder, the victim’s landlord Christopher Jefferies, also successfully filed lawsuits against eight newspapers for libel.  Jefferies was arrested in December 2010 for “questioning on suspicion of her murder” and later released and cleared of any charges in Yeates’ murder, according to the Sun.

Yeates’ neighbor Vincent Tabak “admitted her manslaughter and awaits a murder trial,” according to the BBC.

Lord Judge ruled that the Mirror’s two reports on Jefferies “vilified” him and “would have provided Mr Jefferies with a serious argument that a fair trial would have been impossible.”

In an April 2011 story, Tabloid Watch explained Jefferies was subject to a “quite disgraceful character assassination” in the media as he was labeled by the media “obsessed by death,” “angry,” “creepy,” and “lewd,” among other terms.

iMediaEthics wrote in May when UK attorney general Dominic Grieve started “proceedings” against the two newspapers for contempt of court.

The Telegraph noted that attorney Bambos Tsiattalou, had “warned the media by letter” on Jefferies’ behalf after Jefferies’ Dec. 2010 arrest not to publish any “stories which were damaging or defamatory.”

UPDATE: 08/01/2011: 6:44 AM EST: Added information about attorney Bambos Tsiattalou, about Jefferies’ being arrested for questioning but not being charged, and about the negative media reporting on Jefferies.