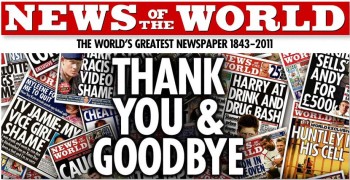 (Credit: News of the World)

British TV actors Tina O’Brien and Ryan Thomas and football agent Simon Bayliff are the latest people to receive phone hacking settlements from News Group Newspapers, which published the News of the World.

iMediaEthics wrote to lawyers for the three and News UK for more information. Charles Russell Speechlys, who represented Thomas and O’Brien, provided iMediaEthics with its statement which read in part:

“Ms O’Brien and Mr Thomas claimed their voicemail messages were hacked by NGN journalists and, as a result, they would have been privy to personal voicemails from friends and family on their phones, and messages they left for others. A settlement has now been agreed. Each settlement includes an undertaking by NGN not to intercept the Claimants’ voicemail messages, to pay compensation to the Claimants, and join in a statement in open Court to apologise to the Claimants for the misuse of their private information.”