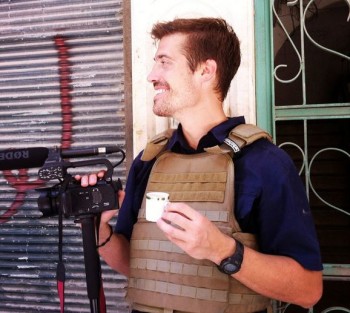 ISIS released a video of Foley’s beheading this week. He has been missing since 2012. ISIS also threatened to murder another American journalist, Steven Sotloff.

The video was only available from Aug. 19 to 20, but English said the newsroom didn’t change its position on publishing the video. Instead it was just taken down because of technical reasons and they never re-posted it, she said.

iMediaEthics asked English why it wasn’t republished it the Star stood behind the video and it was only taken down because of a technical error. English said she didn’t know.

We then asked the paper’s editor, Michael Cooke, who simply told iMediaEthics “we’ve moved on.”

Cooke defended the publication to English because he said the video was newsworthy despite its graphic nature.

“I felt it important people hear that brave man speak . . . both to demonstrate his courage (calm voice, straight face, resolution to his fate) and to show viewers the absolute cruelty of his killers,” Cooke told English. “And yes, I understand the horror of it even with the throat-cutting edited out.”

He also pointed out that the person who beheaded Foley had a British accent, which is impactful when shown in a video:

“Hearing the Brit accent of the executioner is crucial in understanding where these terrorists are coming from — our own backyard. If you ever wondered about ISIS, wonder no more.”

He added, “Soft people shouldn’t run newsrooms. It’s not a squishy job, and at times that matters.”

For her own part, English said she is “too soft” because she thought the edited video was “deeply disturbing, chilling” and too much.  But, only four people complained over the video, she said. “I expect that’s largely because most of you didn’t see the video,” she commented.

iMediaEthics wrote earlier this week about the NYPost’s graphic front page image of Foley just before he was beheaded.  We also looked on Friday at how the Australian media handled the graphic images of Foley.