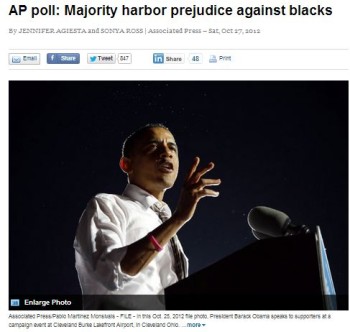 Editor’s Note: This is Part 2 of a 2-part analysis, by David Moore, of the Associated Press poll on racial attitudes, conducted by researchers from Stanford University, the University of Michigan, and NORC at the University of Chicago. See also What the AP Poll on Racial Attitudes Really Tells Us, Part 1

A recent Associated Press news story about race in America reports that over half of Americans “harbor prejudice against Blacks,” and that this prejudice has had a negative impact on President Barack Obama’s approval rating and level of support in the presidential election.

How does AP know so  many people are prejudiced? They base their statements on two measures used in the poll that were intended to describe racial attitudes.

One measure they call “implicit racism,” which I examined in Part 1 of this analysis.

It turns out that, according to that measure, racism is more complex than reported.

Yes, the measure suggests that 56% of Americans overall are racist against Blacks, as reported in the story.

These are startling numbers, perhaps even shocking, but AP did not find them worth reporting, perhaps because they substantially challenge conventional wisdom about what racism is.

The Other Measure of Racism  — What Does It Really Mean In This Poll?

The second measure of racism that AP used is what the researchers call “explicit racism,” which is the subject of my analysis in this column, Part 2.

For the AP poll, “explicit racism” was measured by asking respondents eight questions that were supposedly designed to elicit anti-Black or pro-Black sentiments. (All questions are included later in this post.)

The questions that were asked for this measure, however, did not elicit only racial attitudes. As acknowledged by the researchers themselves, the questions seem to have measured other non-racial feelings as well.

Think of it this way.

A liquor store has a bottle of wine for sale. It’s stocked in the Chardonnay section of the store and it’s labeled “Chardonnay.” Once you buy it, you discover that it is actually a blend of two wines – Pinot Grigio and Chardonnay. When you go back to the store, the salesperson acknowledges that the bottle could well be a blend, and points to some fine print at the bottom of the label, warning you of this fact. The fine print says that there could be a little, or a lot of  Pinot, or maybe even most of the wine could be Pinot. No one, including the bottlers, really knows the proportions.

Naturally, you wonder why the bottle was called Chardonnay in the first place given this ambiguity. But technically, the salesperson says, you were warned, and if you didn’t see the note, then that’s your problem. In the meantime, the store continues to sell the wine as though it is “Chardonnay.”

Well, of course, that couldn’t happen. The store and the winery would be guilty of false advertising. If it is labeled Chardonnay, it should be 100% Chardonnay. Otherwise, the wine should be listed as a “blend,” with estimates of the proportions of each kind of wine in the bottle. That is the practice followed by the wine industry.

They note that while they assume, for purposes of the study, that “explicit racism” measures “racial attitudes and only racial attitudes,” (i.e., that it is 100% Chardonnay), that assumption is not necessarily correct. Instead,

“Some scholars have speculated that the survey questions used here purporting to tap Symbolic Racism may tap other constructs. If such confounding is present, the apparent impact of anti-Black attitudes here may be partly or mainly due to other constructs.” (emphasis added)

What this means is that even though the researchers call it “explicit” (or “symbolic”) racism, in fact it’s quite possible that the measure is really a combination of racism and some other set of non-racial attitudes.

How likely is the measure to be a blend, rather than a pure measure of racism? Apparently, it’s a pretty sure bet.

The citation included in the academic report refers to a study by Michael Tesler and David Sears on Obama’s Race. These two authors don’t just speculate that symbolic racism may measure more than racial attitudes. They assert quite definitively that “symbolic racism does prove to have strong components of both racial and non-racial attitudes.”*  (emphasis added)

Moreover, the non-racial attitudes component appears to be a “measure of conventional conservative values,” especially “individualism.”

This means that when the three researchers with the AP poll found that Obama’s approval rating and electoral support were lower among  people who were supposedly racist, in fact some of those people classified as “racist” were not necessarily racist after all. They just happen to have conventional conservative values. And we would expect conservatives to rate Obama lower than moderates or liberals.

The researchers don’t tell us, except (as noted above) to acknowledge that the “apparent” impact of racism could be partly “or mainly” due to something else (in this case, conservatism) instead.

It’s possible, then, that the AP poll isn’t as much about the impact of racism as it is about the impact of conservatism, an attitude that has been researched quite extensively. Yet, nowhere in the AP story is there even a hint about this likelihood.

To understand the problems with the “explicit racism” measure, it’s useful to examine a few of the questions (all eight questions used for this measure can be found in the academic report of the poll, as well as in this text below).

In this question, respondents are asked whether they agree or disagree with the statement:

“Irish, Italians, Jews, and other minorities overcame prejudice and worked their way up. Blacks should do the same without special favors.”

The answers are coded as follows (any score above .50 is classified as a “racist” answer):

If people agree with this statement, they will receive a racist score. No doubt, people who have racist feelings will agree with the statement, but it’s also possible that many people who don’t harbor any prejudice against Blacks will also agree – because they believe that no one of any race, or any group for that matter, should receive “special favors.”

Here is another of the eight questions:

“How much discrimination against Blacks do you feel there is in the United States today, limiting their chances to get ahead?”

If you answer “a little” discrimination, or “none at all,” your answer is classified as “racist” (because it’s scored higher than .50).

The problem here is that many people may not recognize how much discrimination actually exists in the country. But does that lack of recognition necessarily mean they are racist? Certainly, we would expect avowed racists to deny any discrimination, but we might also expect many others, who harbor no prejudice against Blacks, to be unaware of the kind of discrimination many Blacks experience. Yet, they too would be classified as racist.

A third question is this one:

“It’s really a matter of some people just not trying hard enough; if Blacks would only try harder, they could be just as well off as whites.”

The coding here is the same as for the first question. Any agreement is classified as racist.

The problem with this question, as with the scale overall, is that there are several dimensions to the question. If one substituted “the poor” for Blacks and “the wealthy” for whites, would we consider a positive response to be racist? If the poor just tried harder, they could be just as well off as the wealthy.

This question would probably be treated as one that measures non-racial political conservatism vs. liberalism, liberals believing that the system is geared against the poor, with many conservatives believing that getting ahead is all about individual effort. If you believe the poor can get ahead just by hard work, you’re likely to have that same feeling about Blacks – or about any group. And that could indicate you are conservative, but not necessarily racist.

So, the question could be measuring some combination of pro- and anti-Black sentiments, but also liberal and conservative political sentiments not related to race. We don’t know how much of each.

The other questions included in the survey to measure “explicit racism” are shown below. Most of them include the possibility that some blend of racism and conservatism (and possibly even other values not related to race) could be at the root of highly-scored responses.

“Generations of slavery have created conditions that make it difficult for Blacks to work their way out of the lower class.” (Coding: Strongly agree = 0, Somewhat agree = .25, Neither agree nor disagree = .50, Somewhat disagree = .75, Strongly disagree = 1).

“Over the past few years, Blacks have gotten more economically than they deserve.” (Coding: Strongly disagree = 0, Somewhat disagree = .25, Neither agree nor disagree = .50, Somewhat agree = .75, Strongly agree = 1).

You can figure out whether you would have been considered racist by adding up your score for each of the eight questions, and taking the average. Anything above .5 and you’re classified as racist.

What the AP News Story Really Tells Us

I want to reiterate what I wrote in Part 1, that the method of polling the respondents (online, based on a probability sample), and the statistical analysis of the results, appear to be quite sound. I’m also inclined to believe, as the AP story and the academic report suggest, that there is significant racism in this country, and that it could indeed have had an impact on President Barack Obama’s approval ratings and re-election chances.

Still, I am troubled by the “fine print” about this particular study, the admission of significant limitations that the researchers make in the academic report of the poll, but which are ignored altogether in the AP story.

The problem is that when AP says 51% of Americans harbor explicit anti-Black attitudes, we can’t be confident that the percentage is really about racial attitudes and not more about standard conservative views.

Similarly, when AP concludes that this explicit racism has negatively affected Obama’s approval rating and electoral standing by several percentage points, we have to recognize that this conclusion may be more about the impact of conservatism than racism.

There are too many limitations of the explicit racism measures, too much uncertainty about what that “racism” is and how it can be measured, to treat those numbers as authoritative descriptions of the American public.

The AP study and academic report represent the kind of intellectual exercise that is routinely done in academic journals, where results are understood to be tentative, ambiguous, often contradictory, and open to multiple interpretations.

For AP to announce publicly the results of their study, holding back some relevant findings and failing to mention the study’s very significant limitations, does not seem ideal from a journalistic perspective.

However well intentioned this news report of poll results about the amount and impact of racism in America, my sense is that the AP news story distorts and misleads more than it educates.

This is Part 2 of a 2-part analysis, by David Moore, of the Associated Press poll on racial attitudes, conducted by researchers from Stanford University, the University of Michigan, and NORC at the University of Chicago. See also What the AP Poll on Racial Attitudes Really Tells Us, Part 1