9/11 Plane debris: NYPD doesn’t believe it is a hoax 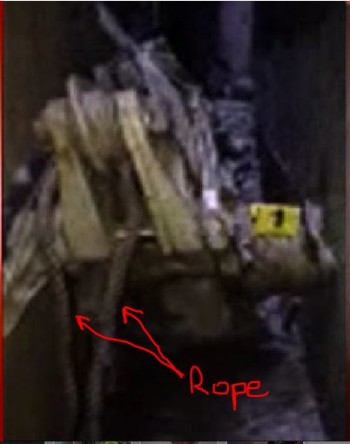 In a video provided by the NYPD, a rope appears to be around and through the plane's trailing edge flap actuation support structure. (Credit: NYPD video still screenshot)

The New York Police Department told iMediaEthics that it does not believe the recently found piece of a 9/11 airplane is a hoax.

Numerous questions were raised about the piece of aircraft recently found near Ground Zero in lower Manhattan.  Many media outlets have speculated that perhaps it is a hoax.

The New York Post wrongly claimed that the NYPD believes that perhaps the debris was put there recently.

“While the police believe that the mechanism was hidden behind 51 Park all 11 years since the attack, they say they are checking the possibility that it was put there in the interim.”

And in another article the Post implies that the NYPD is investigating the theory that it was a hoax (emphasis ours):

“A lawyer for the proposed ‘Park51’ mosque claimed the landing gear was planted by opponents of the project — a theory Police Commissioner Ray Kelly said cops would explore.

But, Paul Browne, the NYPD’s Deputy Commisioner of Public Information, informed iMediaEthics by phone today  that there is no validity to the New York Post conspiracy theory claims.  When asked about the theory the piece had recently been placed there, Browne responded, “We don’t believe that.”

Browne went on to explain that the aircraft piece had clearly been in “there a long time. It’s rusty.”  Because a “rope was intertwined in the wreckage,” it made it unlikely that the 767 debris fell out of the sky on 9/11 at the same time as a rope landing in the tight space between buildings.

The scenario that Brown envisioned as a possibility was that during the clean-up of 9/11, the aircraft piece become tangled and difficult to remove and was then “possibly lowered into the tight space” by workers. This was done either because they did not want to slow down the clean-up or because the piece was forgotten in the chaos.

The aircraft piece “is hydraulic but not a landing gear” as identified widely by the media, Browne said. The NYPD released a statement Monday:

“A Boeing Company technician confirmed to NYPD Crime Scene detectives yesterday evening that the aircraft wreckage discovered at the rear of 51 Park Place in lower Manhattan last week is a trailing edge flap actuation support structure from a Boeing 767.”

The schematic below released by the NYPD shows that it is a part of the wing of the plane.

9/11 Plane debris: NYPD doesn’t believe it is a hoax