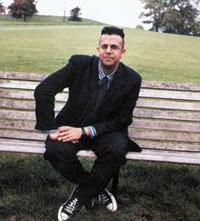 Simon Singh, pictured above, is being sued for libel by the British Chiropractic Association for remarks made about the BCA's promotion of ineffectual and potentially dangerous treatments.

NYTimes blogger and evolutionary biologist Olivia Judson opened up a discussion on her blog The Wild Side last Tuesday. Her subject: the ongoing libel suit of journalist Simon Singh by the British Chiropractic Association (BCA).

Singh is being sued by the Association for an article he published in the comment section of The Guardian, “Beware the Spinal Trap”. In it, he stated that the BCA promotes ineffective and potentially dangerous treatments for children, saying that “the British Chiropractic Association claims that their members can help treat children with colic, sleeping and feeding problems, frequent ear infections, asthma and prolonged crying, even though there is not a jot of evidence. This organization is the respectable face of the chiropractic profession and yet it happily promotes bogus treatments.”

The Singh case raises a number of ethical problems—some on the part of Mr. Singh, some on the part of the BCA, and some reflected in the nature of British libel law itself.  But Judson neglects to mention one ethical problem lying at the start (if not the core) of Singh’s dispute with the BCA. That is, Singh made a clear mistake in his original article (removed by the Guardian, but copied here): According to the BCA [in this statement], he failed to contact the association for comment on his description of their practices.

Ethical journalism according to the Society of Professional Journalists, requires that a reporter “diligently seek out subjects of news stories to give them the opportunity to respond to allegations of wrongdoing.” The BCA alleges in their press release that Singh never contacted them for his Guardian comment piece. If such is the case, Singh broke one of the first rules of ethical reporting.

But what does that have to do with being sued for libel, since the SPJ code is not a legal proscription. Singh, like Jared Diamond in the New Yorker case, may be ethically culpable for failing to contact the BCA, but is he legally culpable for defaming them?

Failing to give a source the opportunity to respond to claims about them actually does play a big part in whether someone might be deemed libelous.  First of all, it is the easiest way to avoid being sued in the first place.  Moreover, the act of not contacting the subject of your article could be construed as “reckless disregard for the truth,” and a further marker of culpability if your remarks are judged to be false. (Libel and privacy, By Bruce W. Sanford)

But in Singh’s case, even though the fact that he allegedly failed to seek comment from BCA adds to the ammunition against him, it doesn’t on its own prove that he committed libel.

“The case at present hinges on the meaning of ‘bogus.’ In a preliminary hearing, the judge ruled that bogus means deliberately dishonest, rather than a lack of evidence… (The ruling encouraged me to look up “bogus”; according to my dictionary, the word originally meant a machine for making counterfeit money.)”

If the judge is right about the meaning of “bogus,” it looks like Singh is in some defamatory hot water because he lacks evidence that the BCA was intentionally or maliciously dishonest.

But if a different interpretation of “bogus” is used, Singh suddenly has the truth on his side. Singh could argue that there is significant evidence that treatments promoted by the BCA actually are ineffectual and possibly dangerous (despite their best wishes).

All in all, the thorniness of this particular trial drives Judson to suggest that British libel law might be more of hindrance to good science journalism than a protection against bad journalism in general:

“Arguably, however, English libel laws create particular difficulties for science journalists. Science, after all, is about evaluating evidence. Science journalism, sometimes, requires pointing out when evidence is weak or absent. This is especially important in the context of medicine and health, where misinformation or lack of information can be deadly. For example, if you have HIV, taking vitamins instead of anti-retrovirals can significantly hasten your death…The problem the libel laws create is not so much that critical stories can’t be written, but that they won’t be. As the conversations I had this summer show, for many journalists and their employers the potential for a libel case is a powerful deterrent to criticism: the pieces aren’t worth the hassle.”