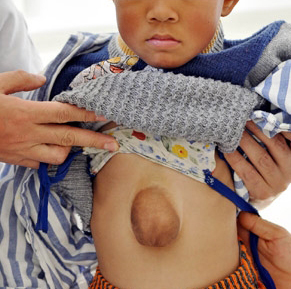 WHY IS THE MAN WITH THE “WORLD’S LONGEST EAR HAIR” PAIRED WITH THIS YOUNG BOY WITH A HEART DEFECT? The ABC News photo gallery caption reads: “Four-year-old Zhang Weiyuan of China has a condition called pentalogy of Cantrell in which the heart protrudes from the body. Zhang is shown here at Shengjing Hospital in Shenyang, in northeast China’s Liaoning province Nov. 21. (Li Shuangqi/AP Photo).” In this photo, the boy’s face is blurred to protect his privacy…the other children and adults featured in this ABC “Medical Marvels” gallery are not so “lucky.”

UPDATE 3/26/09: Please note that many of the links to the photo gallery go to the wrong pages. ABC has chopped about 30 images from the disturbing slide-show that lived on the ABC News site for 3 years. Many are images of children that we cited in this report, but even the photo of the woman who didn’t cut her hair for 16 years is missing. We are waiting for official word that this deletion is due to our complaint. We will keep StinkyJournalism readers updated.

The ABC News photo gallery titled “Medical Marvels” might just as easily have appeared in a lurid grocery store tabloid from the 1950s. It titillates viewers with a black screen and the cautionary words: “WARNING: Some of the following pictures are of a graphic nature. Viewer discretion is advised.”

This image gallery, chock-o-block with ailing and deformed people, is just one example of mainstream media’s recent ventures into commercial exploitation of what former generations unkindly called “freaks.”

The ABC image slide show, in particular, purports to be “medical” in nature–not voyeuristic or entertainment. However, any pretense of science is quickly shattered when ABC combines the pictures of frightful medical conditions, such as the photo above of the child with protruding heart, with the image of a man displaying the “World’s Longest Ear Hair.”

Why else, other than titillation to create web hits, would ABC News tout rather common conditions– people with over-sized tumors, extra toes or club feet–as medically unusual? These conditions occur in the United States with almost clockwork predictability and are not, therefore, medically surprising. However, the difference is, as gleaned from the photo gallery captions, that these conditions in developing world counties are sometimes left untreated until they become exaggerated—or “freakish.”

For example, among the images included in the ABC News photo gallery are three of “Jingle [sic] Luis, 15, from Luna in the province of Apayao on the island of Luzon in the Philippines.” In one, her face and identity are not blurred; she is, in fact, shown walking on crutches and sitting in a wheelchair at New York’s Children’s Hospital at Montefiore. (Update 3/24/09–ABC News misspelled her name. It is Jingles, not Jingle).

Another image displays a close-up photograph of her twisted legs and deformed feet, and a final image is of her CT scan. Why is this teenage girl’s medical condition considered newsworthy? Club feet are a commonly recognized medical condition going back to Biblical times, and certainly not a newsworthy “medical marvel.”

The exploitation of an identified teenager—a minor–by ABC News is an unfortunate throw-back to a time when our society was far less sensitive to voyeurism of such medical conditions.

Remember the circus side-shows where carnival barkers promoted “Lobster Boy” or “Reptile Woman”? These so-called “freak show” attractions have thankfully all but disappeared. But for now, slide-shows, such as the one found on ABC News’ web site, have unfortunately reemerged as the next generation circus side-show that should also disappear. The sooner the better.

Al Tompkins, Broadcast / Online Group Leader on the faculty at journalism school, The Poynter Institute in St. Petersburg, Florida, and author of Al’s Morning Meeting Blog, told StinkyJournalism.org by email: “Generally, shocking or disturbing photos are legitimate news when the use of those images causes more good than harm. These images, it seems to me, are a hi-tech version of the old carnival freak shows that the thoughtful public abandoned years ago.”

Tompkins continued, “If the images were coupled with journalism that helped us understand what life is like for these victims of disease or circumstance, if the images were illustrative of others living with similar conditions, they could be legitimately included on a news website.  But showing them with a paragraph of information do nothing to help contextualize the photo.”

Indeed. One photo, number 61* out of 62 in the slide-show, has such a brief caption, it fails any attempt to pretend that this image means anything more in its context than a shocking oddity. The name of the doctor in the photo, the location where the photo was taken–even the name of the ailment– are all missing. It simply says: “Tiffany Linker’s connective tissue is turning to bone. You can see her back protruding.”

So how exactly does this photo of Ms. Linker’s “protruding” back fit together with image number 60* of a woman who apparently stopped cutting her hair for 16 years? The caption states: “Xia Aifeng, 36, stands on a chair to comb her long hair as her daughter, left, and a neighbor watch in Shangrao, in east China’s Jiangxi province, April 8, 2007. The 5-foot-4 woman has grown her hair to a length of nearly eight feet. Aifeng hasn’t cut her hair since she was 20 and now has to spend 90 minutes to wash her hair once a week.”

Does ABC News really believe that this woman with oddly long hair is a “medical marvel” just as the title promises, or is she part of a slide-show side-show intended to create web traffic at the expense of human dignity?

We have asked ABC News for comment. Media relations representatives said they would get back to us with their response.

UPDATE 3/24/09 : It appears that ABC News made an undisclosed update in the photo gallery. Photo numbers 60 and 61 cited above were formerly numbers 59 and 60 before the update. It seems that image number 34, showing Jingles Luis after the corrective surgery that cured her club feet, was added after StinkyJournalism’s and the doctor’s complaint to ABC News. StinkyJournalism is investigating.