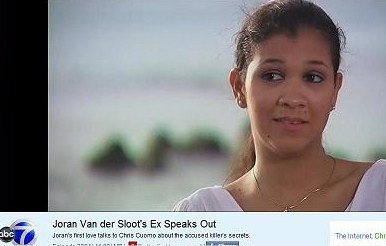 ABC licensed photos and materials from Melody Granadillo, the ex-girlfriend of Joran van der Sloot, in an exclusive interview for the network's "20/20." (Credit: Screenshot from the "20/20" video)

Media Bistro reported June 17 that ABC News has yet again dished out money for “licensing” photos and documents, and the network got the exclusive interview.

ABC’s interview with the ex-girlfriend of Joran van der Sloot, Melody Granadillo, aired June 18 on the network’s “20/20” show.  Van der Sloot is being investigated in the deaths of Natalee Holloway and Stephany Flores.

Van der Sloot has been arrested in 2005 and 2007, in relation to the then 18-year-old American Holloway who went missing in Aruba in 2005. He was arrested this month “in connection with the murder” of Flores and for extortion of Holloway’s family. Van der Sloot confessed to Flores’s death, but has since retracted that confession.

Media Bistro reported that “ABC News licensed photos and text messages from Granadillo” and that ABC News would “disclose that it had licensed the material during the broadcast.”  About four minutes into the eleven minute interview with Granadillo, Chris Cuomo, who conducted the interview, did describe the Melody’s diary as part of the “photos and material Melody licensed to us.”.

Media Bistro reported it’s unknown how much ABC News paid in its licensing.

ABC has been called out several times in the past two years for its paying sources for materials.

iMediaEthics wrote June 18 about ABC’s “Good Morning America’s” lack of disclosure in its June 15 interview with George and Cindy Anthony, the parents of Casey Anthony, who is charged with the 2008 murder of her daughter, Caylee.  The interview featured materials the network licensed from the Anthonys in 2008 for $200,000.

iMediaEthics wrote March 19 when it was revealed in court that ABC News, in that licensing deal, paid Casey Anthony $200,000, which Anthony used to pay her defense.

iMediaEthics also noted that ABC was accused of paying the father of Michael Jackson $200,000 for an exclusive interview in 2009.

The Society of Professional Journalists’ code of ethics advises that journalists “be wary of sources offering information for favors or money; avoid bidding for news.”