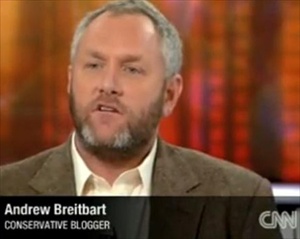 After much criticism from organizations like ColorofChange and progressive media watchdog MediaMatters, ABC News rescinded its invitation to Andrew Breitbart to appear in its election day coverage.

The Washington Post’s Greg Sargent noted that the invitation for Breitbart to appear was “a big deal” because the network was “helping Breitbart rehabilitate himself,” following the ACORN and Shirley Sherrod scandals, which damaged his credibility.

In both of those cases, Breitbart’s site broke news stories based on videos which turned out to be edited and out-of-context clips.

With ACORN, the video showed activists James O’Keefe and Hannah Giles dressed up as a pimp and prostitute getting advice on tax evasion from employees of the now-defunct ACORN.  The videos were a scandal for ACORN and led to the nonprofit organization’s demise (ACORN filed for Chapter 7 bankruptcy on Nov. 2). It later was revealed that the videos were edited and that the couple were not dressed up as a pimp and prostitute when they sought advice.

In the case of Sherrod, Breitbart’s site published a clip of the former Department of Agriculture employee speaking at an NAACP gathering saying she didn’t give as much help as she could to a white farmer. Shortly after the clip’s publication, Sherrod was asked for her resignation.  The next day, it was revealed that the incident took place in the 1980s and was part of a larger account of how Sherrod learned to overcome racial issues.  Breitbart defended his story and publication as he was not trying to criticize Sherrod, but “the NAACP in its six-day media-enabled negative branding of the Tea Party as racist.”

The Post’s Sargent explained why Breitbart on ABC would have been significant:  “ABC News’ decision to host Breitbart isn’t a matter of ideological balance, since there are conservative media critics just as partisan who aren’t as prone to distorting the truth who might have been tapped…

“In this context, ABC News’ decision to host Breitbart, in any capacity, is a political act that extends credibility where none has been earned. It legitimizes a figure the mainstream press should have learned by now to be suspicious of. It sends the message to other media organizations that Breitbart is someone who can be trusted not to deliberately mislead an audience that is presumably coming to ABC News to be informed about matters of politics and public policy, when evidence suggests the opposite is true. Most importantly, it’s the first step in Breitbart’s journey back to mainstream legitimacy,” Sargent wrote.

However, Breitbart didn’t end up appearing on ABC News.

While ABC News cited a misunderstanding for why Breitbart didn’t participate, Breitbart blamed his uninvite on “the institutional left.”

ABC published an open letter to Breitbart on its press room site here.  The Nov. 2 letter accuses Breitbart of puffing up his involvement on the network and uninvites him.  It reads:

“We have spent the past several days trying to make clear to you your limited role as a participant in our digital town hall to be streamed on ABCNews.com and Facebook.   The post on your blog last Friday created a widespread impression that you would be analyzing the election on ABC News.   We made it as clear as possible as quickly as possible that you had been invited along with numerous others to participate in our digital town hall.  Instead of clarifying your role, you posted a blog on Sunday evening in which you continued to claim a bigger role in our coverage.  As we are still unable to agree on your role, we feel it best for you not to participate. ” (emphasis ours)

Breitbart criticized ABC News in his Oct. 31 post for “Not standing up for free speech and the 1st Amendment. Not sticking by their original invitation. Not standing up for diversity of opinion.” He added that he wasn’t promised a “specific amount of airtime, nor payment for my analysis.”  But, he indicated that ABC News was “paying” for his hotel and flight to Arizona.

In an interview with Mediaite, Breitbart reportedly claimed that the incident hurt his “brand.”  “You have damaged me, you have damaged my brand, and I’m asking you to walk this lie back.  I never exaggerated, I never lied, I never played my role up,” Breitbart is quoted as saying.

MediaMatters, which advocated for Breitbart to be uninvited, detailed the “timeline of ABC’s conflicting statements” on Breitbart’s involvement with the network here.

Breitbart announced his involvement with the election coverage in an Oct. 29 post on one of his sites, Big Journalism.

In a statement that day, ABC spokesperson David Ford reportedly told Media Matters that Breitbart would be “one of many voices” for ABC that day.

Two days later, Breitbart posted an “e-mail from ABC confirming their invitation for me to participate in their online and network broadcast election night coverage.”

The e-mail posted by Breitbart reads:

“This program will broadcast on the ABC Television Network, abcnews.com, ABC News Now, and ABC News Radio.  The show will be live on the web and ABC News Now as well as on the network from 4:00pm till 11:00pm MST.  We would love for you to be a part of our program, and please let us know what we can do to accommodate your needs.”

ABC News Digital executive producer Andrew Morse explained in an Oct. 30 post on the ABC News press room website that Breitbart isn’t “an ABC News analyst” or “consultant,” that Breitbart wouldn’t be paid or affiliated with ABC News and “has not been asked to analyze the results of the election for ABC News.”

Further, Breitbart wouldn’t be on the ABC News broadcast, but he would be “one of several guests…to engage with a live, studio audience…participating in an online-only discussion and debate…on ABCNews.com and Facebook.”

An ABC spokesperson, Jeffrey Schneider, is quoted Nov. 1 in a Yahoo News article saying that “It’s entirely possible that anybody
who says anything thoughtful or interesting during the streaming portion of it can be excerpted on the broadcast.”

ColorofChange.org, a group “to strengthen Black America’s political voice,” advocated for Breitbart’s appearance for ABC News be nixed.  The organization lobbied for ABC to keep Breitbart off the air and sponsored a petition which reportedly generated more than 125,000 signatures.

In a statement on the uninvite, ColorofChange wrote:

“We applaud ABC News’ decision to rescind their offer to have Andrew Breitbart take part in tonight’s Election Night programming. Breitbart, whose entire career is built upon ‘reporting’ lies and falsehoods disguised as news, should never be given such a prestigious public platform that presents him as a legitimate journalist. By rescinding their offer to Breitbart, ABC News has taken a giant step in helping to wash our collective hands of the fear mongering and race-baiting that have no place in our political discourse.”