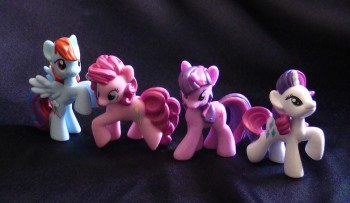 The New York Times was duped by a hoaxer who had made the My Little Pony Roof claims. The Times appended an editors’ note to its June 20 story, admitting it was hoaxed.

The original story quoted blogger Benjamin Wareing as saying Roof had posted images from My Little Pony, Mediaite reported. Wareing fessed up to his prank in his own blogpost, Gawker pointed out, writing that it was “a little experiment…with the sole purpose of reporting on inadequate reporting.”

The Times editors’ note states: “An earlier version of this article included a reference to a British blogger who claimed that Dylann Roof’s manifesto was similar to earlier blog entries Mr. Roof had written. That passage was removed from the article after questions were raised about the blogger and his claims. Subsequently, the blogger said in a post online that he had fabricated the information about Mr. Roof’s supposed earlier blog entries.”

“The New York Times reporter took to this like a fat kid in a candy store,” the blogger Wareing wrote, adding that the prank was “situationally hard, intellectually easy.” Wareing added that he didn’t provide the Times with “any screenshots of proof of [the alleged Roof blog’s] existence other than my own word.”

“A note to any would-be journalist, or one that has ‘made it’, always check your credibility of your sources. It may just save your career, or at least, your integrity,” he commented.

The Times’ reporter, Frances Robles, tweeted that she was “Twitter trolled.” Wareing said his friend, Sadrak Ramirez of Lexington, S.C., was Facebook friends with Roof and was getting swarmed with requests for interviews.

As I lament a bad day of being Twitter-Trolled, I remember that 9 people died Wednesday for no other reason than being black. #Perspective

The Times’ public editor Margaret Sullivan commented that it was a reminder to fact check. “As Fusion reported, a British teenager set out to trick the Times with some bad information — and succeeded. The story now carries an editor’s note,” she wrote. “And the incident proves once again the need to verify as fully as possible.”