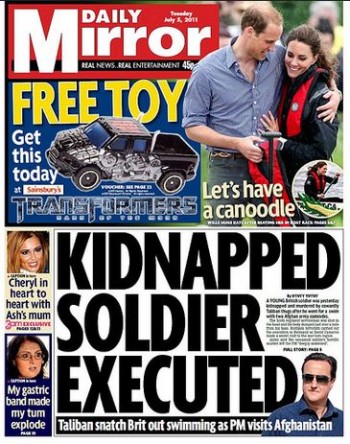 The Daily Mirror published a “misleading” photograph of two children to accompany a report last summer about a food program for the needy. The problem with this photograph was that the children depicted were not participants in the food program and their mother complained to the UK press regulator the Independent Press Standards Organisation that it gave a false impression of her family’s financial status. IPSO ruled, in part, against the newspaper.

The Mirror‘s July 2019 story, “Scandal of 50,000 kids going hungry in summer holiday,” reported that the government “quadrupled funding” to help feed “around 50,000 youngsters from disadvantaged homes” over school breaks.” The story quoted a teacher at a school hosting a holiday club that would also provide food to children, and included a photo of the two children.

The mother of the two children complained that the photo shouldn’t have been used because her children were only in the holiday club, not in need of food. She argued it was “misleading” and would suggest “her children were poor and hungry” and they could be bullied over the photo use, IPSO reported. The mother noted she signed a consent form to allow the club to take photos of her children for promotion, but she didn’t think that meant a newspaper could use the photo.

The Mirror stood by its article and photo, saying that the press release for the club provided information about free school meals and the local council invited it to the club to report and photograph. While the Mirror said the school allowed it to photograph children at the club, it did remove the image from its website after the mother complained.

Because of that, IPSO ruled the photo broke guidelines. “Given the sensitivity of the subject matter of the article and that the children were clearly identifiable, the Committee found that the publication of the image of the complaint’s children, in the context of an article which focussed on child poverty, represented a failure to take care not to publish misleading information,” IPSO ruled.

iMediaEthics has written to the Mirror and attempted to contact the children’s mother.