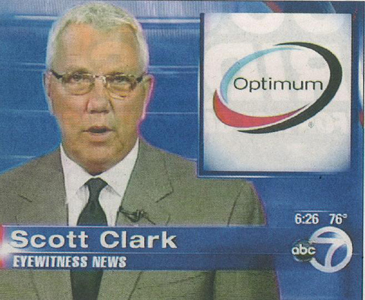 Television news continues the current media trend to blur the boundary between advertising and news content to reap profits.

While other New York stations, including WNBC-TV/Channel 4 and WCBS-TV/Channel 2, preceded ABC/Channel 7 with similar arrangements with Verizon FiOS and a car manufacturer respectively, Huff wrote, this is WABC/Channel 7’s first time blending advertising and editorial.

Major market stations are making these sponsorship arrangements in order to be profitable, Huff reported:

“News directors have fought to stop the ads, but ultimately realize if they want to continue putting crews on the street, sending reporters out of town and continue working, they must bend. If not, they face extinction. That doesn’t necessarily make it right, but necessary.”

Huff states that before the sports section of the news starts, the news program goes to commercial break, ending with an Optimum commercial.  That commercial is followed by a message that “Tonight’s ‘Eyewitness News’ sports report is sponsored by Optimum. For the best services, at the best value, the truth is it’s Optimum or it’s not.”

For context, WABC/Channel 7 is the top rated TV station in the nation’s number 1 media market, Huff reported, and the website Station Index confirms.. Optimum is a cable and internet company in the New York, New Jersey and Connecticut area.

iMediaEthics wrote to WABC/Channel 7 and will update with any response.

The Society of Professional Journalists’ code of ethics advises that journalists “distinguish news from advertising and shun hybrids that blur the lines between the two.”

iMediaEthics wrote about ScienceBlogs, July 12, when they tried–and failed–to add a Pepsi-sponsored blog named “Food Frontiers” to its blogging community.  The sponsored blog upset many bloggers–including current bloggers at ScienceBlogs–and was quickly removed from the ScienceBlogs site.