This Goofy Photo of Francois Hollande was Deleted by Reuters & AFP 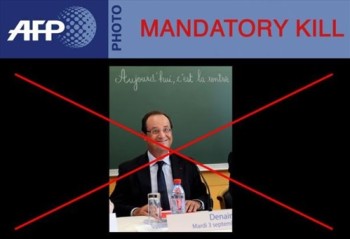 Agence France-Presse and Reuters retracted a photo of French president Francois Hollande smiling goofily with big eyes but denied they yanked the picture because the government didn’t like it, the Guardian reported.

The photo was taken down by AFP with a kill notice saying “Please take it off your systems. We are sorry for any inconvenience and thank you for your co-operation,” and Reuters also issued a “picture kill.”

The Guardian pointed to an interview with AFP’s director of information Philippe Massonnet published by Le Nouvel Observateur. In that interview, Massonnet claimed the picture was removed because of “an editorial decision…after an internal debate” and that “the authorities never ask us to do this kind of thing.”

Massonnet also wrote about the retracted photo on AFP’s blog, calling the retraction “clearly an error.” In response to claims of censorship, he wrote that it “was not the case.”

According to Massonnet’s blogpost, the photo in question was “part of a series of thirty photographs” of Hollande that were largely “uncontroversial.”

Instead of retracting the photo due to censorship, Massonnet wrote that the AFP pulled the picture because it could be used to mock Hollande.

It is “the AFP’s policy to never distribute a free image that ridicules people,” Massonet wrote, according to a Google Translate:

“We took the decision to publish a photograph for its informative value, never for violence or, in this case, ridicule it can generate. For example, it often happens that our photographers at international conferences, surprise world leaders in disadvantageous positions, trying to put my finger in the nose or something.”

However, despite the decision to kill the photo, Massonnet acknowledged that AP ended up “boosted [the picture’s] life expectancy and opened the door to a controversy over a supposed intervention of the Elysee.”

iMediaEthics has written to Reuters asking if the explanation for its kill differs from Agence France-Presse and will update with any response.

This Goofy Photo of Francois Hollande was Deleted by Reuters & AFP