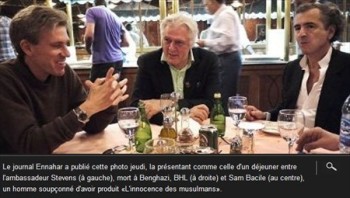 Algerian newspaper Ennahar defended a photo of Christopher Stevens from accusations of Photoshop, the AFP reported.

Stevens, as we have previously written, was killed Sept. 11 in an attack on the U.S. Embassy in Libya. News outlets including the New York Times and the Globe and Mail ran photos of the dead ambassador but defended them as newsworthy and picturing him unconscious, but not yet dead.

On its website, Ennahar identifies itself as an “independent Algerian daily.”

The U.S. Embassy in Algiers called the photo and claims about Stevens “doctored” and “fictitious,” according to the AFP.  In a statement on its Facebook page, the embassy wrote

“Ennahar published a doctored photo and fictitious article of Ambassador Stevens meeting with the producer of the film and Bernard Henri Levy in its September 20 edition. Ambassador Stevens had no association with the reprehensible and disgusting film and cartoon or the men behind them. The U.S. Embassy urges Ennahar to retract this article and photo and not spread rumors that may result in misunderstanding and a violent reaction.”

While the AFP reported that Ennahar did take down the article in question, Ennahar defended the photo saying:

“Ennahar reaffirms that the photograph was found on Internet sites and on Facebook, and that the newspaper had no need to doctor a photo to defend the prophet and Islam.”

We have written to the U.S. Embassy in Algiers for more information and will update with any response. We’ve also written to Ennahar asking how it verified the photo, what the unpublished article claimed, where it got the photo, and more.

We wrote last week about French satirical magazine Charlie Hebdo’s publication of cartoons showing Muhammad that the BBC reported were partially in response to “the uproad in the Islamic world over” the “Innocence of Muslims” video.

“The U.S. Embassy strives to encourage professionalism in journalism, to include proper sourcing and fact-checking before any article or photo is printed in the press.  Given the power of the pen and the vast influence the media can impose, it is always of the utmost importance that a media outlet only disseminate truths, especially when misleading information could have far-reaching and perhaps violent repercussions.  Any media outlet has the responsibility to accurately report information.  It was with these values in mind that the U.S. Embassy reached out to Ennahar.  The following day, Ennahar printed a story about our official statement, acknowledging that it had improperly labeled the photo before printing the article.  It was not an apology per se, but an acknowledgment.”