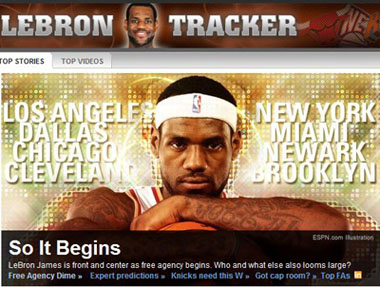 Along with LeBron James and his free agency comes a mess of anonymously sourced rumors as to where the 25-year-old professional basketball star will sign.  But, deciding which anonymously sourced story to believe is hard considering the sources are barely identified and that many of the reports conflict with each other.

James, a Ohio native, has played for the Cleveland Caveliers for the past seven years. Free agency offically started at 12:00 AM July 1, and teams, politicians and fans are all offering their votes.

Sources linking James’ decision to teams are described as “sources close to James,” “unidentified league executives,” and the list goes on.  The Society of Professional Journalists advises journalists “identify sources whenever feasible. The public is entitled to as much information as possible on sources’ reliability.”

Slate wrote June 30 noting that while James can only sign with one team, the past week’s anonymously sourced news reports have claimed James is leaning toward signing with the Chicago Bulls, New Jersey Nets, New York Knicks, Miami Heat and the Cleveland Cavaliers.

Slate identified various anonymously sourced reports.  For example, The New York Times reported June 26 that an unidentified executive said James is “strongly leaning toward joining the Bulls,” and that he thinks “it’s a done deal.”  (Interestingly, the Chicago Sun-Times noted June 28 that teams weren’t allowed to contact players until July 1, so the information sourced to an executive in the New York Times article becomes more suspect.)

Moshe Mandel blogged on The Yankee U June 29 noting that “conflicting reports continue to emerge” on James’ team choice, all based on anonymous sources.

Mandel wrote that the rumors allow teams and players look like “they have multiple suitors and can walk away from the table if they so choose.”  But, the result is “hundreds of false rumors that often go uncorroborated by members of the press and then are regurgitated for our consumption.”

Mandel argued that readers shouldn’t believe the source’s information unless the source is named.

The Wall Street Journal wrote June 30 that the rumors have been going on “since the realization two years ago that James would be a free agent at the same time as fellow NBA superstars Dwyane Wade, Amare Stoudemire and Chris Bosh.”