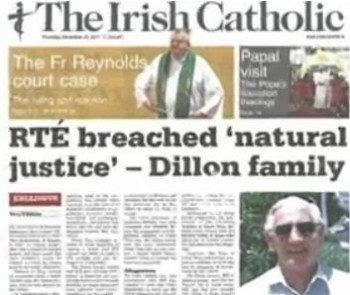 Ireland’s public broadcaster, RTE, accused the deceased Brother Gerard Dillon of sexual abusing a student at a South African school, according to the Irish Independent. Brother Dillon’s family has called for a retraction in his name as he is “silenced by death.”  RTE’s source –a “former pupil who made the allegations” — maintains the allegations.  During the same RTE program, “Mission to Prey,” RTE accused Irish priest Father Kevin Reynolds of raping a minor and fathering her child. RTE has since issued a lengthy apology, paid a large libel fee and started investigating how the wrong accusations against Father Reynolds ended up on the air.

The Irish Independent reported Nov. 26 that Selman is “standing over his allegation” despite the family’s reaction. However, Selmon is quoted as telling the Irish Independent that “I had no idea that my name was going to be plastered all over Irish TV.”

Selmon also told the Irish Independent that “the abuse against him as a child occurred in the 1980s, but he could not remember what age he was. He also declined to go into the details of the allegation in a telephone interview.”

As RTE explained in its own report on the questions against it, Brother Gerard Dillon’s family told The Irish Catholic newspaper they want “either his name be cleared or that the single allegation made against him be proven.”  Of the claims against Brother Dillon, his niece Marion Dillon told the Irish Independent “It’s just unbelievably unjust and he (Br Dillon) is not able to defend himself and RTE expected us to remain silent.”
The Irish Catholic published an article detailing concerns about the article here.  According to the Irish Catholic, RTE “did not seek to see the personnel file on Bro. Dillon or speak to those in charge” in South Africa.

RTE defended its report, saying that “a number of other former pupils of Brother Dillon have alleged he abused them and that their accounts had in turn been corroborated by others,” even though RTE’s report was based on “a single allegation.”

According to the Irish Examiner, the family of Brother Dillon called RTE “casually indifferent” because RTE never contacted the family or the Christian Brothers in South Africa.

They alleged that the report about Brother Dillon is “appallingly incorrect, unsubstantiated and profoundly prejudiced” like RTE’s other claims that Father Kevin Reynolds raped a Kenyan girl and fathered her child.

However, RTE has responded to the family’s claims in a statement which says RTE “made Christian Brothers authorities ‘at the most senior level’ in Ireland aware of ‘specific research’ into the GG Dillon affair.”  RTE said it “made separate efforts to secure comment from the Christian Brothers’ school system in South Africa.”  RTE also said it “wrote to the Dillon family twice.”

The Christian Brothers’ spokesperson, Brother Edmund Garvey, responded to RTE’s defense that it offered the Christian Brothers a chance to comment.  Brother Garvey told the Irish Independent that they didn’t “get adequate time. We effectively had less than 24 working hours to find out what was in this allegation.”

Brother Garvey also told the Irish Independent that between the time RTE asked for comment and the program aired, “he contacted the Christian Brothers in Africa and tried unsuccessfully to call the Dillon family to tell them of the claims.”

He said that he told RTE in the time he was given to give RTE comment that it’s  “a matter of serious concern that RTE has not contacted the African leadership of the Christian Brothers on this matter, nor as we understand it have the programme makers sought to contact the deceased brother’s relations, prior to airing these most serious allegations on TV.”

StinkyJournalism has written to RTE and will update with any response.