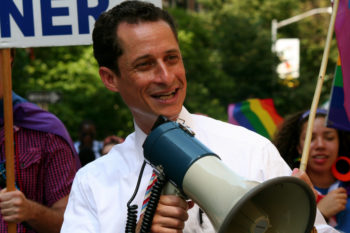 New York Times public editor Liz Spayd looked into readers’ complaints about the Times‘ story on Anthony Weiner’s sexts, which said his behavior “cast another shadow” on his wife Huma Abedin and, by association, the Hillary Clinton presidential campaign. Abedin, a top aide to Hillary Clinton, has announced her separation from Weiner.

Spayd acknowledged the Times‘ coverage wasn’t “flawless” but said she thinks it is “fair and defensible” to call Weiner’s sexts and the couple’s separation “a distraction, an unwanted nuisance, for Clinton” since Abedin is a top aide.

Spayd disagreed with readers who thought the Times article ascribed some of the blame for Weiner’s sexts on Abedin, but conceded, “I can see how readers might think that.”

After looking into the story, Spayd concluded there wasn’t one “calamitous mistake” but instead “a series of small errors.” The Times‘ front-page story by Amy Chozick and Patrick Healy didn’t clearly spell out for readers why Weiner’s sexting affected the campaign, said Spayd. The public editor also took issue with the article’s contention that the sexting “cast another shadow” on Abedin, which Spayd agreed suggested victim blaming. The Times‘ headline in print, “Weiner’s Texts Cast Shadow on Campaign” was also a poor choice, Spayd wrote, because “the story didn’t support it.”

iMediaEthics has written to the Times to ask if it will, in light of Spayd’s assessment, amend any of its coverage or wording. We’ve also contacted the Hillary Clinton campaign for comment.

Spayd has had a busy week, with the Times‘ heavily edited and roundly criticized story, also co-written by Patrick Healy, on Donald Trump and immigration getting attention as well. (See iMediaEthics’s report on this here.)

After her Weiner-Abedin-Clinton report, Spayd addressed the Trump article, saying she understands the questions about the original article.

“Why did the first version seem so off and why wasn’t The Times more transparent about the changes?” she asked.

Times political editor Carolyn Ryan told Spayd that the newspaper’s original story was about Trump’s trip to Mexico City to meet with the Mexican president. However, the news was happening so fast that the article failed to reflect the sharp change in Trump’s tone and the incendiary remarks in his speech later that evening in Arizona. “What that boils down to is: We were moving as fast as we could and the story changed on us,” Spayd summarized.

According to Spayd, the Times reporter Healy had to write both the print and online stories and wasn’t in Arizona when Trump made his speech. If he didn’t have so much on his plate, the Times could have done a better job, she explained. “In this instance, Healy would have greatly benefited from being relieved of writing the print story in order to concentrate on the web,” Spayd wrote.