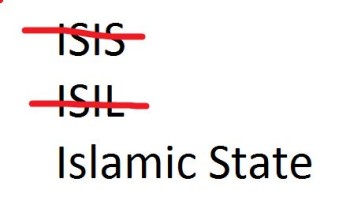 Why does the Associated Press now call the terrorist group, originally known as ISIS, the Islamic State Group? Does the name matter?

If you have been on a remote island this summer, you may be unaware that the terrorist group first called ISIS beheaded American journalists James Foley and Steven Sotloff and British aid worker David Haines.

The Associated Press has already changed its style guide twice this year to reflect the confusion over the group’s name, Poynter reported.

The AP was referring to the group as ISIS, but soon started using the name ISIL, which stands for the Islamic State of Iraq and the Levant, AP’s deputy managing editor and standards editor Tom Kent blogged June 17.

“In Arabic, the group is known as Al-Dawla Al-Islamiya fi al-Iraq wa al-Sham, or the Islamic State of Iraq and al-Sham,” which is an area called “the Levant,” he wrote.

ISIS stands for Islamic State of Iraq and Syria, but Kent pointed out that calling the group ISIS “suggests incorrectly that the group’s aspirations are limited to these two present-day countries.”

Kent quoted AP vice president and senior managing editor for international news to explain, “We believe this is the most accurate translation of the group’s name and reflects its aspirations to rule over a broad swath of the Middle East.”

Yet, the AP changed its position this week, now deciding to call the group “the Islamic State group” moving forward, Kent blogged Sept. 16.

Kent explained the decision was to combine accurately reporting on ISIL’s “decision in July to rebrand itself as the ‘Islamic State'” and avoid propaganda.

Referring to the group as “The Islamic State” wrongly suggests the organization is an official government body. The AP news story on the name change said:

“’The word ‘state’ implies a system of administration and governance,’ said David L. Phillips, the director of Peace-Building and Rights Program at Columbia University. ‘It’s not a term that would be used to characterize a terrorist group or militia that is merely rolling up territory’.”