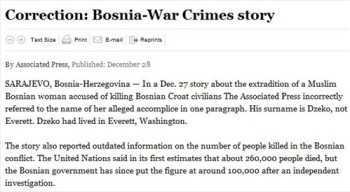 The AP issued the above correction. (Credit: Washington Post, screenshot)

The Associated Press issued a Dec. 28 correction to its Dec. 27 story on “the  extradition of a Muslim Bosnian woman accused of killing Bosnian Croat civilians.”

According to the correction, the AP included “outdated” statistics for the ” number of people killed in the Bosnian conflict.’  No small difference, though: According to the correction, “an independent investigation” the Bosnian government cites claims that about 100,000 people were killed. The AP apparently used the United Nations’ claim that 260,000 people were killed.