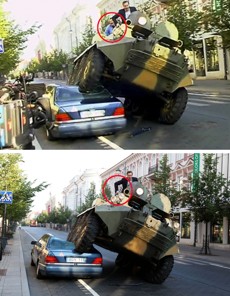 The Associated Press killed the above (bottom) photo after detecting photo doctoring. If you look at the screenshot (top) you see that two people were removed. (Credit: Washington Post)

The Associated Press announced it has retracted a photo from its wire Aug. 15 after finding out it had been doctored.

The photo, which the AP released Aug. 3, served to “dramatize [the mayor’s] anti-parking campaign” and was released to other news outlets, the AP reported. The photo and a video both pictured the mayor in a “public relations stunt” as the mayor is pictured “riding an armored personnel carrier” which “flattened” a parked car.

The photo fakery was spotted in a comparison of the photo and a video also released by the mayor because the video shows two people deleted from the photo, the AP explained.

According to the AP, the mayor’s spokesperson, Irma Juskenaite, defended the altered photo by saying the deletion of the two people — two Swedish producers — allowed the mayor to “draw attention to the issue of illegal parking without extraneous people in the photo.”

The AP’s photography director, Santiago Lyon, commented on the photoshop:  “It is completely inappropriate to provide photoshopped images to media companies as it compromises our credibility and misleads our readers.”

The AP added that “only retouching to eliminate dust and scratches is permitted.”

iMediaEthics has written about the AP’s photo standards a few times recently. Earlier this month, the AP announced it wouldn’t be distributing the White House-released photo of the fallen troops ceremony at Dover Air Force Base in Delaware because the AP believed that the press should have had access.  The photo was taken by an official White House photographer and the media wasn’t permitted to take photos.

In July, the AP fired a freelance photographer after it discovered that the photographer, Miguel Tovar, had used photoshop. The AP also issued kill notices on the photo. Also in July, the Associated Press put a kill notice on a photo they had previously released but had been provided by the state-run Korean Central News Agency.  That photo, of men walking through a flooded area, had been photoshopped.

Can COVID-19 last on glass? How many ventilators? And, the cost of direct cash payments
UK news broke guidelines with 'highly disturbing' footage of NZ terror attack