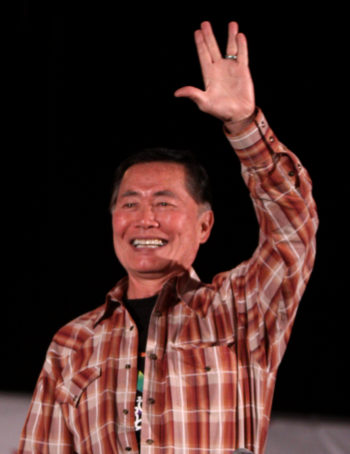 The actor, best known for his role as Hikaru Sulu on Star Trek, posted a tweet claiming he was running for Congress, and several sites published stories about his impending political career.

But, if those sites had taken a look at the calendar, they would have realized his tweet was posted in the first minutes of April Fool’s Day.

Takei’s original tweet linked to an article on the Daily Buzz that allegedly quoted him talking about running for Congress, in order to challenge Rep. Devin Nunes for his seat. iMediaEthics has written to the Daily Buzz to ask if it coordinated with Takei for the prank.

“It didn’t take long for publications to pick up Takei’s tweet and the accompanying story. TMZ, People, Entertainment Weekly, Just Jared, The Hollywood Reporter and other big-name outlets all reported it as fact that Takei was running for Congress,” Gossip Cop reported.

Eight and a half hours later, at 8:32 AM, Takei tweeted that he wasn’t actually running for Congress.

“No, I’m not running for Congress,” he tweeted, along with an endorsement for someone else. “Happy 4/1!”

In the time between Takei’s original tweet and when he fessed up, several outlets reported the claim without any apparent verification. iMediaEthics has written to Takei to ask if any news outlets contacted him to verify the claim before publishing their stories.

What is the Daily Buzz & Who Fell for Takei’s Prank?

A quick look at the Daily Buzz homepage should have given reporters pause. Stories featured on the homepage slideshow included:

TMZ has now posted an update atop its article which reads, “Congressman Nunes will be happy to know the whole thing was a prank … George just said it was an April Fool’s joke. On a level it seemed crazy, but on the other hand, Gopher from ‘Love Boat’ got elected.”

People.com reported on the tweet as if it were real news, according to an archive of the People article. The article has been re-written to add, “Looks like the joke is on us…it now turns out that it was all just a joke.”

There is no disclosure that People itself fell for the story. iMediaEthics has written to People to ask if it will append a note for readers. (The People article and its update were cross-published on Entertainment Weekly.) 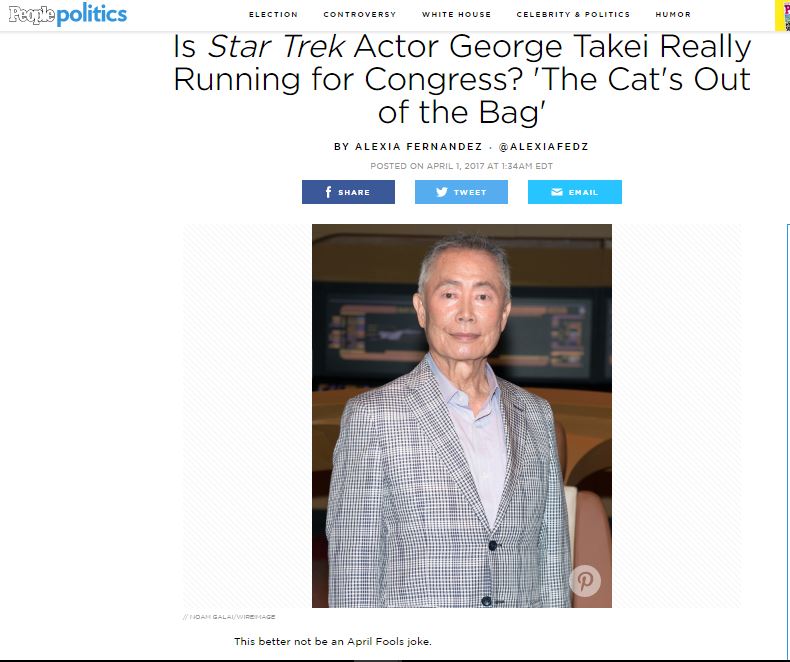 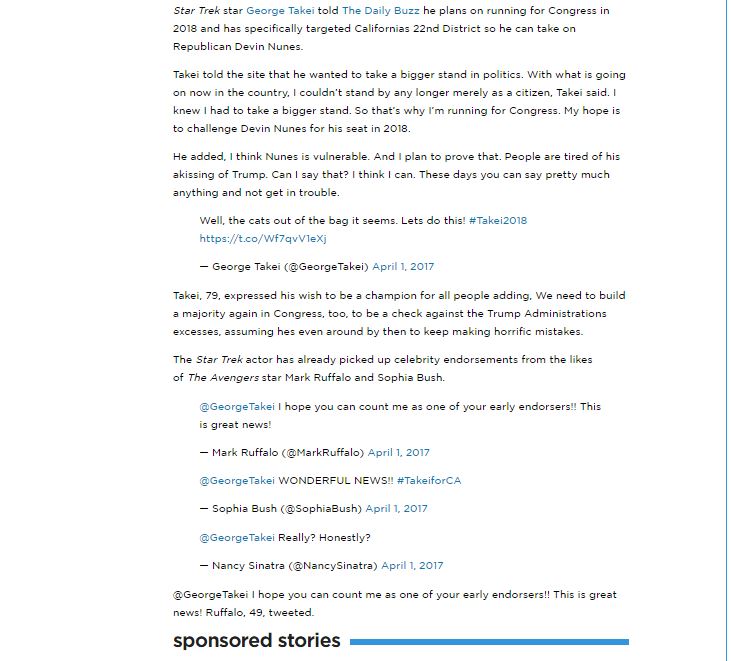 The Hollywood Reporter fell for the story as well, but noted in its original story it tried to contact Takei to verify. It has updated to acknowledge Takei wasn’t really throwing his hat in the political ring. A note at the bottom of the article reads, “This story has been updated with Takei’s tweet indicating his earlier announcement was a joke.” 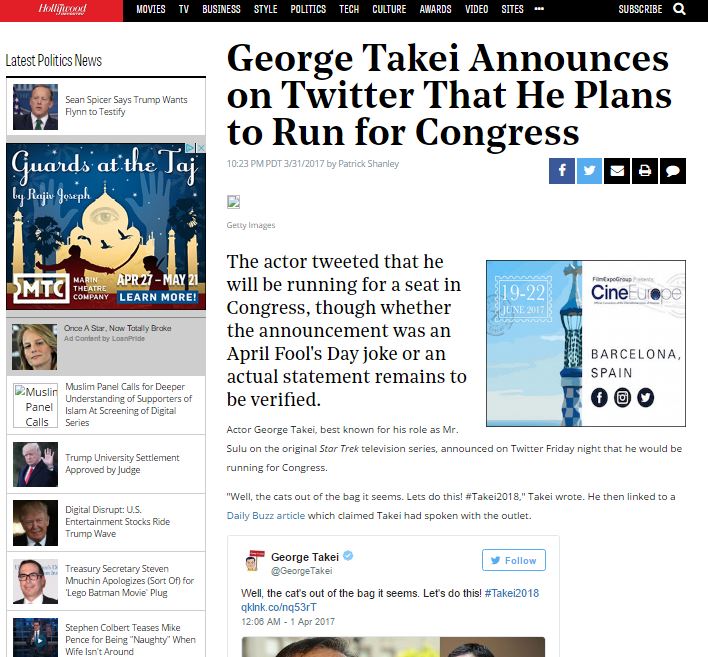 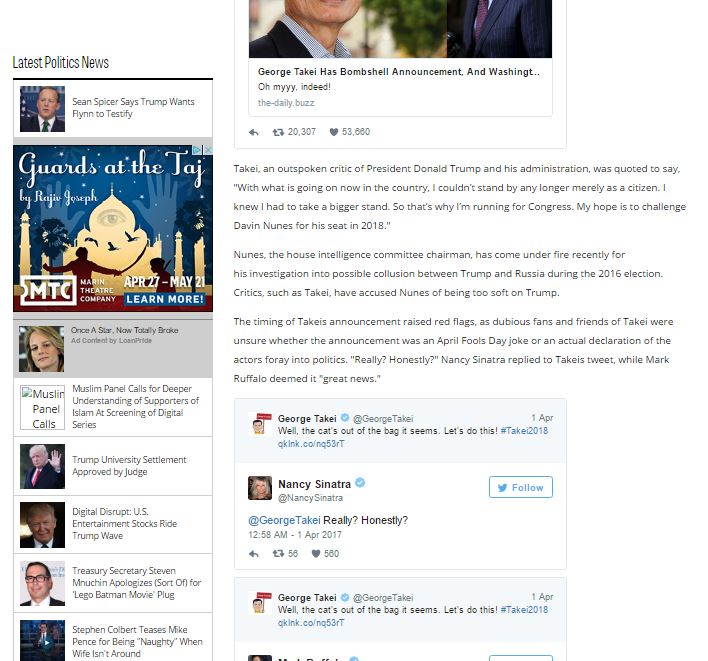 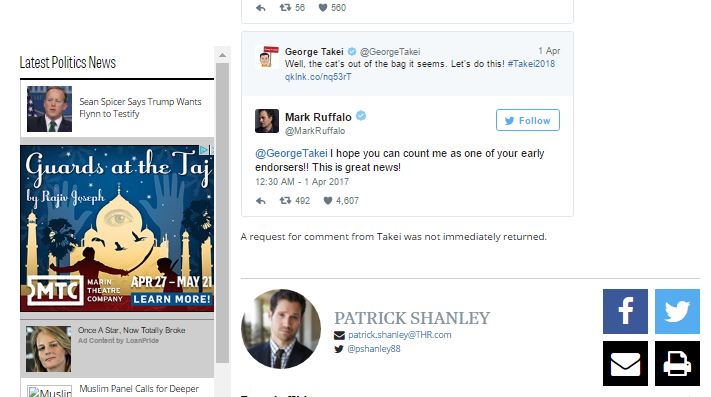 A screenshot of the original The Hollywood Reporter story. (Credit: Archive.org/screenshot)

Celebrity and entertainment site Just Jared posted an update about it being a prank.

iMediaEthics has written to the outlets to ask if they attempted to verify the claim before publication and how they learned it was a prank.