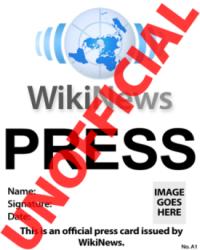 Online-only social media and not-for-profit news media sites are offering their journalists opportunities for press passes. Here is the form from WikiNews.

The perennial “new media” question of who is and who isn’t a journalist also includes: Who gets a press pass? Yes, that piece of laminate can be a badge of honor, and sometimes a necessary tool for online writers who consider themselves–and want others to consider them–journalists.

Without a press pass, a blogger can be blocked from attending government press conferences in their own community. With newspapers cutting staff, new media types can pick up the slack and actively perform this important watchdog function.

New media is gaining ground toward press pass acceptance, according to a few recent stories. Other reports indicate how it is still struggling.

On March 7, the Maryland Daily Record reported on a Maryland press pass battle. Former Baltimore County Attorney and founder of the Baltimore Organ Jay Liner is suing Maryland Governor Martin O’Malley to force the office to issue him a press pass, they wrote.

According to the Record, Liner’s site averages 1,000 hits a week. “In addition to his blog posts, he has posted interviews with former governors Marvin Mandel and Harry R. Hughes, as well as Rep. Frank Kratovil during his successful campaign two years ago for the Maryland’s 1st Congressional District,” they wrote.

The Daily Record reported Liner sought a press pass to facilitate in-depth interviews with “his friend and state senator, James Brochin.” His application to Maryland’s Department of General Services for a pass was denied, and now Liner is pursuing legal means to get one.

But does he deserve one? The Daily Record quoted Nathan Siegel, a Washington, D.C., media lawyer, who said, “Simply because someone defines himself as a blogger doesn’t mean he should have a press credential… The same is true with a journalist.”  But while a “journalist” employed by a known media outlet doesn’t have to prove piece by piece that they are worthy of a pass, the broad spectrum of blogs requires online writers to show concretely that what they do is journalism.

In New York City, a proposal for press credentials to be extended to online writers was just released following a 2008 lawsuit filed by three bloggers denied passes. The new rules require applicants to show that they have covered at least six events “where the City has restricted access, within the two-year period preceding the application,” according to a City Law Department release posted by Gotham Gazette.

“This is a press credentialing system for the online age that can serve as a model for governments around the country,” said Administrative Law Division Chief Gabriel Taussig.

“We have streamlined and improved New York City’s Rules for Press Credentials,” said Norman Siegel, one of the attorneys in the lawsuit. “The new rules will enable journalists to gather and report news in a more successful manner than before. Online journalists will now be considered as 21st century journalists and be treated equally to print, television and radio journalists.”

The Record writes that in Maryland, “in years past, reporters seeking press credentials had to provide a letter from an editor or station manager to the Department of General Services, verifying the reporter’s employment.” Under this system, you’re not a journalist because you say you’re a journalist, but because you work for an established institution of journalism.

According to the Daily Record,

Maryland has a new credentialing policy, with more specific criteria: The applicant must be employed by an “independent bona fide” news organization or be a freelancer who “regularly engages in regular news gathering.” Credentials may not be used to engage in “any lobbying, promotion or publicity activity” advocating for a candidate or issue.

Upon viewing the state’s policy for granting press passes, Liner told the Daily Record he thinks he qualifies.

“Substantively, I think I qualify,” he said. “I think I meet all the criteria.”

Meanwhile, some say just because you write for print doesn’t mean you are journalist-enough for a press pass. Rob Capriccioso at True/Slant writes March 1 about what he calls “a congressional bias against certain press.”  Capriccioso says he’s “faced difficulty getting a congressional press pass as a Washington staff reporter for Indian Country Today… because they flat out equate tribes as foreign governments and/or lobbyists.”  “Because the paper I work for is owned by a company that’s owned by a tribe, somehow that means our journalism is tainted,” he writes.

Capriccioso says he’s been told Indian Country Today could contact Congress to request a “special hearing” on whether they merit a press pass, but that it would be “above my pay-grade.”

These legal battles to obtain a press pass are serious business.

For one thing, it can perhaps help keep you from getting arrested. A March 8th story in the Daily Californian, an independent, student-run newspaper at the University of California-Berkeley, tells about how a young journalist spent 20 hours in jail last Thursday after being arrested while covering a protest on assignment as a multimedia producer for the campus publication.

The story argues that Cameron Burns, the 18-year-old reporter, would have been able to avoid arrest if he hadn’t forgotten his press pass that day.

The Daily Californian writes Burns was “tackled to the ground, handcuffed and moved into a bus heading for jail.” Though he “repeatedly identified himself as a reporter for The Daily Californian, Burns told the Californian he could not prove it to the officers without his pass, which he had left in the newsroom.

Gotham Gazette and other New York bloggers should feel optimisic about being able to avoid this kind of trouble if the proposed changes to New York City’s policy go into effect. A public comment period on the new pass rules “extends through April 7, 2010” when there will be a public hearing according to the release.