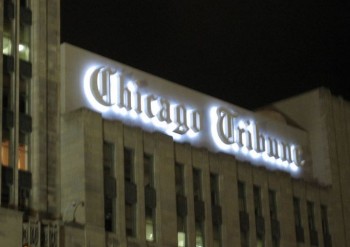 Brisbane highlighted Carr’s article’s lead – “a four-paragraph anecdote based on unnamed witnesses.”  As Brisbane explained, that anecdote “alleged that Michaels in January 2008 sat down at a hotel bar with fellow senior executives and offered a waitress $100 to display her breasts.”  Carr also reported that Michaels denied the claim.

“The combination of a sensational episode, unnamed sources, a blockbuster story above the fold and – to top it off – a story about something of a competitor makes for pretty provocative stuff.  Taking this approach, The Times was essentially telling the reader: Trust us, we have this nailed.” While Brisbane wrote that he “enjoyed” the article, he reported receiving “several letters voicing concern about the anonymity.”

And, he ended up deciding that the story could have been more trustworthy had Carr used a different lead.   Brisbane reported that Carr said he could have framed the story differently, but “the anecdote seemed fitting because it occurred early in the tenure of the new Tribune management and sent a strong message to Tribune employees.” Brisbane added that Times media editor Bruce Headlam knew Carr’s sources and that both “were absolutely confident of the reliability of the account.”  Brisbane also reported that Carr “explained the anecdote and its sourcing to Headlam with ‘a great deal of specificity.’”

Corrections: Homeless Deaths, Back to the Future Dog
Lawsuit against U Mass student newspaper over police blotter story thrown out