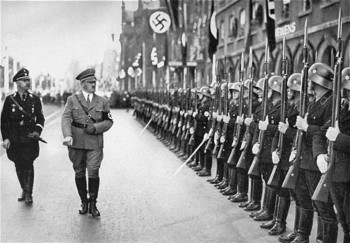 The Associated Press denied that it cooperated with the Nazi regime after new research from historian Harriet Scharnberg suggested otherwise.

“The Associated Press news agency entered a formal cooperation with the Hitler regime in the 1930s, supplying American newspapers with material directly produced and selected by the Nazi propaganda ministry, archive material unearthed by a German historian has revealed,” the Guardian reported, further noting that the AP was “the only western news agency able to stay open in Hitler’s Germany.”

For example, the AP had hired Franz Roth, a photographer “whose photographs were personally chosen by Hitler,” the research indicates. The AP has since deleted his photos, according to the Guardian, which noted that the Nazis used AP photographs in its propaganda. Scharnberg’s German-language research, “The A and P of Propaganda,” is available here.

Scharnberg told iMediaEthics by e-mail: “In its statement from March 30th AP confirms some key findings of my research on the AP “Bilderdienst” in Nazi Germany. Of course, the statement does not comment on all findings. As AP continues its own research I am very confident that it will thereafter confirm my conclusions on the whole.”

In a statement responding to the research report, the Associated Press said that last year it provided material to Scharnberg for her research but distanced itself from the Nazi-related claims.

“Her recently published report, based also on other source material outside AP, describes both individuals and their activities before and during the war that were unknown to AP,” the Associated Press statement says.

The wire service denied that it was affiliated or worked with or for the Nazis or Hitler.  “The AP rejects the suggestion that it collaborated with the Nazi regime at any time,” its statement responded. “Rather, the AP was subjected to pressure from the Nazi regime from the period of Hitler’s coming to power in 1933 until the AP’s expulsion from Germany in 1941.” The AP said it didn’t know that there were any claims Nazi propaganda produced its material and that if it did it expected it would have disclosed it.

The AP also argued its reporting in the 1930s “helped to warn the world of the Nazi menace,” pointing to its Berlin bureau chief Louis P Lochner’s 1939 Pulitzer Prize, possibly saving AP Jewish employees in Germany by giving them jobs in other countries, and the bureau chief getting interned during the war. The AP also noted that it’s a not-for-profit news service.

Shortly after the war started, “the remnants of the AP bureau, including its physical premises and AP’s photographic archives, effectively were under full Nazi control and possession.”

The AP went on to say that Scharnberg’s research highlights “a German photo agency subsidiary of AP Britain that was created in 1931, two years before the Nazis came to power,” but that group was under the Nazi press control starting in 1935.

U.S. newspapers were supplied with some of these images through the German subsidiary,” the Associated Press statement explained, saying that Nazi government approved photos were disclosed as such. Further AP argued those images of that time from Germany had legitimate news value as editors and the public needed to learn more about the Nazis.”

Al Qasimi family complains over 5 Outlets
Corrections: The Roomba didn't do it! Irish Libel Law, Irish or British, How many Troops Abroad?