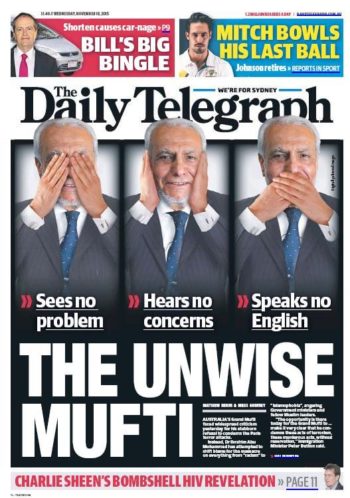 Australia’s Daily Telegraph depicted a Muslim religious leader as a monkey on its front page, playing off of the “Hear No Evil, See No Evil, Speak No Evil.”

The front-page photos of Grand Mufti of Australia, Dr. Ibrahim Abu Mohamed, were captioned “Sees no problem, Hears no concerns, Speaks no English.” (Mohamed is Egyptian and doesn’t speak English.) The headline was “The Unwise Mufti.”

The cover image was in response to Mohamed’s reaction to the attacks on Paris. His Nov. 15 press statement said, in part:

“We reiterate that the sanctity of human life is guaranteed in Islam. These recent incidents highlight the fact that current strategies to deal with the threat of terrorism are not working. It is therefore imperative that all causative factors such as racism, Islamophobia, curtailing freedoms through securitisation, duplicitous foreign policies and military intervention must be comprehensively addressed.

“In addition, any discourse which attempts to apportion blame by association or sensationalises violence to stigmatise a certain segment of society only serves to undermine community harmony and safety. Credit goes to those who have called for calm and responsibility. We call upon all people of goodwill to stand against fear-mongering and injustice.”

That statement upset some, the Telegraph reported, “by appearing to shift blame for the attacks to everything from ‘racism to Islamophobia.'”

But the Telegraph’s front page also upset readers. “People have duly taken to Twitter to brand the image ‘alienating’, ‘irresponsible’ and even tantamount to ‘inciting terrorism,'” according to the UK Independent.

“Ever since political correctness went mad, it’s been rare to see African or Middle Eastern men portrayed in poses usually reserved for monkeys,” the Guardian reported.

See below tweets about the cover.

Mohamed didn’t seem upset by the front page, the Telegraph noted, pointing to his comments on 2UE radio about the cover.

“On 2UE the Mufti laughed off the suggestion. Asked what he thought of The Daily Telegraph’s front page, through his translator Dr Mohammed pointed to the mockery ­endured by the prophets and said: ‘I laughed and I laughed.'”

News Corp. Australia, which owns the Telegraph, declined to comment to iMediaEthics.

iMediaEthics has written to representatives for the Grand Mufti for comment