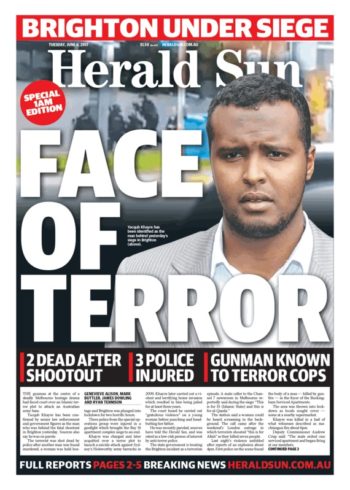 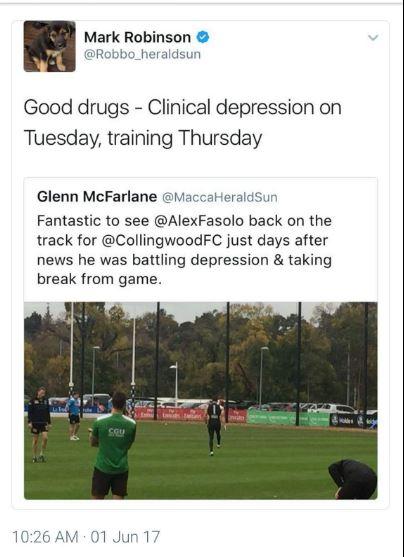 Robinson, the paper’s chief football writer, quickly apologized for his tweet, which the Herald Sun‘s own story on the incident called “highly inappropriate.”

Robinson is quoted as saying, “I am deeply sorry to Alex and the Collingwood Football Club.  I acknowledge an error of judgement and I was wrong. I accept the tweet made light of mental health issues and I should not have published it.”

Insenstive tweet about alex Fasolo. Apologies to Alex and the fans. Wrong choice of words

The Herald Sun‘s editor, Damon Johnston, apologized directly to Collingwood’s president and called the tweet “out of line, wrong” and unrepresentative of “the Herald Sun‘s view on how issues of mental health should be handled in the media,” according to the Herald Sun‘s story.

iMediaEthics has written to Collingwood Football Club to ask if it has heard directly from the Herald Sun or Robinson regarding the matter. We’ve also contacted the newspaper’s publisher News Corp Australia and tweeted Robinson for further comment.

Seriously @Robbo_heraldsun just stand down. No excuse for your behaviour. Your ignorance on footy is one thing but this….#sackrobbo

@Robbo_heraldsun you made a mistake we all do. Your apology is inadequate seemed insincere. You need to do more to show true remorse

i dont feel good though. i just am very dissappointed in your tweet. players/people really value ur opinion.

The sport in question is Australian rules football, not soccer. We regret the error. Thanks to @ben_blowers for catching the error.