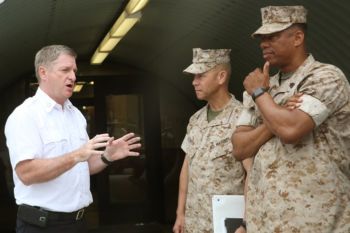 Anonymous source policies typically advise journalists not to use such sources to attack others. The reason? Anonymous sources can use a news outlet to unfairly take public shots in a private battle without any accountability. But the New York Daily News allowed just that in a Dec. 4 article about Fire Department of New York Chief of Department James Leonard. In this story, no sources of multiple attacks are named.

Update: Leonard was put on ‘modified assignment’ and removed from his position pending a review, today, Dec. 6. “While a review is conducted by the city’s Law Department concerning allegations of inappropriate behavior, Chief James Leonard has been relieved of his duties as Chief of Department effective today and placed on modified assignment,” the FDNY’s Frank Gribbon told iMediaEthics by e-mail. Gribbon said “Chief of Operations John Sudnik is serving as Acting Chief of Department.”

The article accuses Leonard of “pitting himself against the agency’s lone high-ranking woman in a bitter power struggle that may cost him his job.” However, the story, by Ginger Adams Otis, is entirely reliant on anonymous sources and “rumors” which the Society of Professional Journalists’ ethics code associates with poor journalism practices.  The story breaks another traditional journalism ethics no-no by publishing a quotation attributed to an anonymous source that disparaged Leonard, and then the Daily News editor in an e-mail responding to iMediaEthics makes it worse by digging in and trying to defend doing so. The anonymous source is quoted as saying “You never know if you’re getting nice Jimmy or his other side — he’s like Dr. Jekyll and Mr. Hyde.”

iMediaEthics asked the Daily News about the use of anonymous sources to criticize. The New York Daily News editor-in-chief Robert York told iMediaEthics, “I don’t agree with your assertion that disparaging comments were part of the sourced material in this story– it contained only descriptions of an individual’s observed behavior and, at one point, summed up with a 19th-century literary reference.”

So, according to the New York Daily News editor, if an anonymous source compares someone to a negative dual-nature character–one that is evil– it isn’t an attack on Chief Leonard’s character and a clear breach of media ethics standards but only an objective observation and 19th-century literary reference?

The story doesn’t list how many anonymous sources the Daily News used, or how they would be in a position to know what they allege. Were they just two sources for the article, or were each of the anonymous source attributions all separate people? Readers don’t know because sourcing only states “sources” — not how many, or if the same sources are responsible for all the information in the article or if different sources are responsible for different bits of information.

iMediaEthics has written to the Daily News reporter, Ginger Adams Otis, who wrote a book in 2015 about firefighting, Firefight: The Century-Long Battle to Integrate New York’s Bravest, to ask how many sources she had, what their relation to the story is, and what the Daily News anonymous source policy is.

The New York Daily News editor wrote to iMediaEthics with his defense. “The NYDN policy on anonymous sources calls for two or more people with direct knowledge of the subject or first person observations of actions or events – who can’t speak publicly without risk to their personal safety or continued employment. We also evaluate the source’s motivations and any potential benefit possibly derived from publication (there is other nuance contained within but that’s the heart of it),”  New York Daily News editor York told iMediaEthics, adding “the NYDN doesn’t discuss its sources.”

The sources listed in the article are:

iMediaEthics asked Society of Professional Journalists’ ethics chair Lynn Walsh about the reliance on anonymous sources.  Walsh flagged that the Daily News failed to provide any explanation for why it granted anonymity. “If journalists are going to use anonymous sources, unnamed sources, etc. we need to explain to our users why we are using them,” she explained. “Being transparent helps explain our process but also can potentially help users better trust the story and information because they have a better understanding of who these people are (without using their name, but you can use descriptions of what kind of positions they are in, what their job duties are, etc.) and, more importantly, why it was important to withhold their identity for the story.”

Walsh added that journalists need to provide readers with information about who the anonymous sources are without identifying them — for example, journalists should provide information so readers “can better understand how the person is connected to the story and why their information, while anonymous, means something.”

Walsh more generally argued journalists rely on anonymous sources too much, “especially when the story is focused on ‘he said, she said’,” and questioned why the story was worth putting on the backs of anonymous sources. She explained:

“Other questions I would have for the Daily News team are more focused on why there was a need to tell this story using anonymous sources? Were the sources’ lives at risk? Or were people just concerned about losing their jobs? A concern about losing a job is a valid one, but is it enough to keep them anonymous? In some cases it may be. That would be a question I would want to ask this staff, to see why they think it rises to that level for this story. It may be worthy, but I would need more information from them about the context of how important this story it.”

Former New York Times public editor Margaret Sullivan frequently called out Times reporters for overusing anonymous sources. iMediaEthics contacted her for her thoughts on this case, but she pointed to her previous published articles on the matter.

In a 2014 post, she noted her Anonywatch effort was flagging “gratuitous anonymous quotations, the kind that allow people to speculate, offer personal criticism or get a self-serving (often political) message out without taking any responsibility for it — or the kind that reporters use because quoting someone anonymously is so much easier. It’s also about attribution, and how unnamed sources of some worthwhile quotations are described in such a general way that it provides no real value to the reader.”

Disclosure: iMediaEthics’ publisher Rhonda Roland Shearer’s late partner Ronald Spadafora was FDNY Chief of Fire Prevention. Leonard led the organizing of Spadafora’s funeral, but Shearer has never socialized with Leonard. Shearer read the New York Daily News article and was struck by the level of anonymous sources.  Shearer did no reporting for this story.