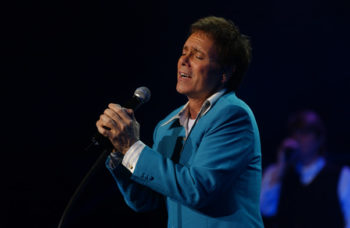 The BBC apologized for upsetting Sir Cliff Richard, the 75-year-old iconic rock ‘n’ roll singer, with its live coverage of a 2014 raid at his property in South Yorkshire. The raid was related to an allegation that Richard sexually assaulted a boy in 1985. The police said this month that they aren’t charging the singer because of a lack of evidence and Richard has maintained his innocence.

The Crown Prosecution Service pointed iMediaEthics to its statement about the matter, which said “we have decided that there is insufficient evidence to prosecute.” The South Yorkshire Police sent iMediaEthics its statement  saying it accepted the CPS decision.

Richard’s representatives told iMediaEthics by e-mail, “Sir Cliff has said all he wishes to say on the matter, and we will therefore not be making any further comment.” Richard gave an interview to the Daily Mail — more on this below — in which the Mail disclosed he was paid a “fee,” which the Mail said he “is donating” to charity. 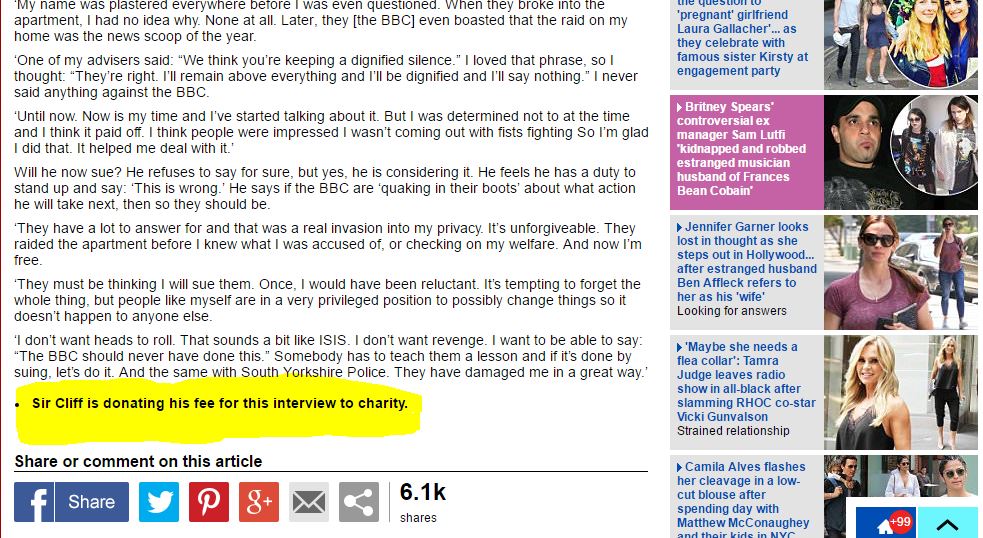 CAPTION: At the bottom of the Daily Mail article the Mail reports that Sir Cliff Richard “is donating” the interview fee to charity. iMediaEthics is attempting to verify this donation. (Credit: Daily Mail, screenshot detail, highlight added).

In 2014, the BBC learned that the police were investigating Richard and were tipped off to the raid at Richard’s estate, according to the Press Gazette. The South Yorkshire police said they thought the BBC would report on the allegations if they didn’t respond to their inquiries and ended up letting them know about the raid as long as the BBC didn’t report on the allegations before the raid. The BBC said they never were told that reporting on the matter would be a problem.

So the BBC reported live from the raid at Richard’s residence.

Richard complained that he was identified, arguing that his identity should have been kept private unless there were charges. However, the BBC said that isn’t required by the current disclosure standards. Further, the BBC noted that the Home Affairs Select Committee said there was “nothing wrong” with the BBC’s argument in reporting on the allegations and investigation.

After the police said they wouldn’t be charging Richard, both the police and the BBC apologized for upsetting Richard.

The South Yorkshire Police said in a statement sent to iMediaEthics: “The force apologises wholeheartedly for the additional anxiety caused by our initial handling of the media interest in this case and has implemented the learning from this and the subsequent review conducted by former Chief Constable Andy Trotter.”

According to a BBC News story, the South Yorkshire Police asked Trotter to investigate its handling of the case. Trotter found it was wrong for the police to let the BBC know about the raid in advance because it invaded Richard’s privacy and gave the police bad press.

The BBC pointed iMediaEthics to its statement, linked below, and the Home Affairs Committee’s findings.

In a lengthy statement on its website, the BBC said it was “very sorry” Richard “suffered distress,” but that the BBC has to “report fully stories that are in the public interest.”

The investigation into Richard was “squarely in the public interest” because he is “prominent,” the BBC said, noting that it also reported Richard’s “full denial of the allegations.” The BBC said in part:

In a June 16 statement after the police investigation ended, Richard argued that “other than in exceptional cases, people who are facing allegations should never be named publicly until charged.”

“I am obviously thrilled that the vile accusations and the resulting investigation have finally been brought to a close,” he remarked. Richard also compared the way he was treated to “being hunted like ‘live bait.'”

In a June 20 interview with the Daily Mail, for which there was an interview “fee,” Richard indicated he might sue the BBC and the police. The Mail reported: “His anger, hurt and sheer bewilderment — mostly towards the police and the BBC — is laid bare. He says he is considering suing both the BBC and South Yorkshire police for what they have put him through. He reels off every country in the world in which his name was sullied.”

Richard is quoted as saying “We’re talking about it with the lawyers and at the appropriate time we’ll have made a decision definitely. I do feel that they owe me something.”

The Mail disclosed at the bottom of its article “Sir Cliff is donating his fee for this interview to charity.” iMediaEthics asked the Mail if it typically discloses when sources donate their fees or when sources are paid for interviews but hasn’t heard back. Richard’s reps didn’t respond to iMediaEthics’ question about how the fee came about.