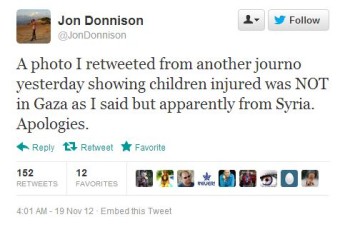 BBC “Gaza and West Bank Correspondent” Jon Donnison apologized after re-tweeting a photo that wrongly said it showed “children injured” in Gaza when the photo was really from Syria.  Donnison’s Nov. 19 tweet read:

“A photo I retweeted from another journo yesterday showing children injured was NOT in Gaza as I said but apparently from Syria. Apologies.”

BBC Watch slammed the re-tweet, calling it “malicious fauxtography,” and Dennison’s reporting, calling it a “decision to promote deliberate misinformation.”  (BBC Watch also called his apology “nowhere near sufficient.”  BBC Watch notes that it has the “independent support of CAMERA — the Committee for Accuracy in Middle East Reporting in America” and that it was founded to focus on “various aspects of BBC reporting on the Middle East.”)

While BBC Watch commented that “the picture is indeed heartbreaking,” the photo was from Syria, which BBC Watch claimed another tweeter had let Donnison know before he re-tweeted it.
It appears Donnison’s re-tweet of Hazem Balousha’s photo has been deleted.

The UK Sun reported that a BBC spokesperson commented on the tweeted photo, saying:

“Jon Donnison retweeted the photograph in good faith. He issued a correction and apologised as soon as he learned that the picture was not from Gaza.”

iMediaEthics has written to the BBC seeking a response to the BBC Watch criticism and will update with any response.

Meanwhile, in its report on the photo error, the IB Times reported that

“Rupert Murdoch, owner of The Sun, wrote that the incident ‘raises more serious questions about the credibility of the corporation’s news operation in the wave of Lord McAlpine scandal.'”

However, the quoted comment attributed to Murdoch was actually written by a journalist at the Sun, Ryan Parry, for his Nov. 21 article.  iMediaEthics has written to IB Times asking for a correction and will update with any. The “Lord McAlpine scandal” mentioned refers to the BBC’s report that didn’t name McAlpine but led to him being identified as being involved in child sex abuse, as iMediaEthics has written. The BBC recently settled with McAlpine for nearly $300,000 and BBC director general George Entwistle resigned after the report..