Being hoaxed was 'crushing & embarrassing,' Peta Pixel says, Battle of the B 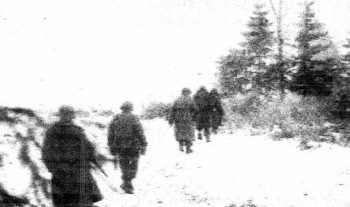 One of the hoax images claimed to be discovered in a foxhole. (Via PetaPixel)

Several sites, including Peta Pixel, Gawker blog io9 and Popular Photography, reported the exciting news that there had been a recent discovery of a World War II soldier’s camera and photos of the Battle of the Bulge.

Only the problem is the photos weren’t just found. In fact, Peta Pixel noted in its apology for being tricked that some of the photos being touted as a brand new find were published in a book almost a decade ago. The photos, while not discovered on an abandoned camera recently, were from the Battle of the Bulge.

Peta Pixel, a photography news site, apologized and admitted it was hoaxed by the story. Peta Pixel’s original July 1 story was titled “Soldier’s Camera and Photos from Battle of The Bulge Found in Foxhole 70 Years Later.”

The article claimed U.S. soldier Louis J. Archambeau, who was found dead in 1945, left the camera filled with photos in a foxhole.

Then, recently, “U.S. Navy Captain Mark Anderson and his historian friend Jean Muller were out with metal detectors, scavenging around Luxembourg” and found the camera and photos.

Peta Pixel noted it found the story via Reddit. A July 1 post on Reddit claimed: “My great uncle was killed in the Battle of the Bulge. About 70 years later, his camera (with undeveloped film) was found in a foxhole” It also linked to website thetroubleshooters.com, which had published the photos in question.

The thetroubleshooters.com link now goes to an error page. Terry Janes, who runs the website, has published an apology and taken down the photos.

Janes wrote about the incident on his website. He explained that he first published the story about five years ago and recently learned the story was bogus. Coincidentally, the pictures went viral, after being posted on Reddit. He said he investigated the pictures and realized they were not from where he thought.

Janes said he alerted media outlets who had asked about the pictures to let them know the story was fake and unpublished anything that the source had provided.

He added that some media outlets didn’t contact him for fact checking.

“There were a few media sources, who never bothered to contact us, never asked for permission or information or made any attempt to verify the story,” he said. “Those media sources just took the story and ran with it, in their desire to cash in on the ‘hot topic of the day’.  Some may still be running that story even now.  It just goes to show how some media sources are responsible and diligent in what they report, and some are not.”

He said he wouldn’t identify the person who provided the fake story, but that the person was “someone whom I personally considered to be a trusted friend.”

He questioned why the person made up the story, noting that he didn’t make money off the story.

Finally, Janes commented that he “will be far more diligent about scrutinizing anything submitted in the future” to avoid future fake stories.

Peta Pixel published an apology July 7 admitting that the story wasn’t true and noting that numerous readers contacted the site saying “they had seen these photos before.”  The story was officially debunked for Peta Pixel when a reader found the photos that were allegedly just discovered published in a 2005 book titled “Battle of the Bulge (Images of the War).”

Peta Pixel’s apology admitted how much being hoaxed affected the site:

“It’s both crushing and embarrassing that we were pulled into the hoax along with so many other publications. In the high-speed world of online news where, as C. H. Spurgeon put it, “a lie will go round the world while truth is pulling its boots on,” we continuously strive to be part of the solution, not the problem.

“And so we hope you’ll accept our apology for helping to spread what turned out to be a lie, and if you have any more sources or information on these images, please share it in the comments below so we can update this article appropriately.”

Atop its original story about the now-debunked claims, Peta Pixel has placed an update with a note about the story being false and a link to the apology.

At least three other sites published reports on the false photo discovery: Gawker-owned blog io9, the Inquisitr, and Popular Photography.

On July 5, io9 posted an update to its original report admitting: “It now appears that the discovery of the camera was real, but the photos were faked.” io9 credited its story to Peta Pixel.

The Inquisitr also published a story on the false claims of the photo discovery, but as of July 8 hasn’t published a correction reflecting that the story is false.

Popular Photography updated its July 1 post to reflect that the story was false.  The update reads in part: “Unfortunately, it looks like these images aren’t what they seem. Apparently, at least two of the photos are from other collections, and it looks like someone along the way may have introduced the fakes.”

Popular Photography also quoted from a Reddit post reportedly written by one of the soldier’s family members. The Redditer, “medrolific” wrote in part: