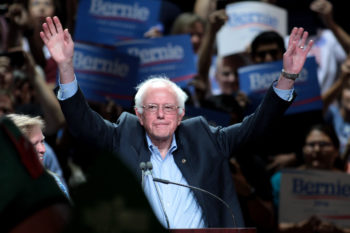 On Monday evening, the night before the series of primaries including the ones in New Jersey and California, the Associated Press announced that according to its calculations Hillary Clinton had obtained the necessary number of delegates to win the Democratic nomination for president over Bernie Sanders. NBC followed shortly thereafter with its own analysis arriving at the same conclusion.

The response by the Bernie Sanders campaign was to chastise the media for rushing to judgment, saying the totals included superdelegates, and that the Democratic National Committee had warned against counting them because they are free to change their minds at any time before they vote on July 27 at the Democratic convention.

Bernie Sanders contends, accurately, that without the superdelegates, Clinton’s total number of pledged delegates does not include a majority of all delegates. And he says that in the time between now and the convention, he will try to convince the superdelegates to vote for him – not because the Democratic voters have preferred him over Clinton (he has fewer overall votes and fewer pledged delegates), but because polls show him faring better against Donald Trump than Clinton does.

Still, Sanders’ argument is likely to fall on deaf ears. The reason? Regular poll watchers (presumably including most of the superdelegates) know that Sanders’ better performance in the polls right now is, at least in part, due to the fact that the GOP has never gone after Sanders the way it has gone after Clinton.

But if the 74-year-old Vermont Senator, a self-described socialist and apparent communist sympathizer (toward Daniel Ortega and the Sandinistas, and Cuba’s Fidel Castro) were to become the Democratic Party’s nominee, red-baiting and denunciations for his socialism and outsized spending proposals would no doubt quickly tarnish his image. His high standings in the general elections polls would likely plummet.

Another reason the superdelegates may not listen to Sanders’ polling argument is that he lost, fair and square. Why should the superdelegates rally around a man because of unreliable poll results, instead of supporting a more experienced woman who actually won?

The poll argument is phony. And Sanders should know it.