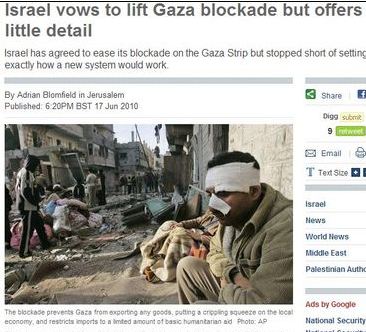 IT'S NOT 2010!--This Jan. 14, 2009 photo was originally captioned in context of Israeli-Hamas conflict. It was repackaged June 17, 2010 in The Guardian to accompany a story on Israel's blockade of Gaza without proper captioning. (Credit: Screen capture from The Telegraph, AP Photo).

MediaBackspin and  YidwithLid blogged June 28 that that the Daily Telegraph used a 2009 photo out of context –suggesting a nearly  two-year-old photo of an injured man was current in its report on the Gaza blockade.

The photo’s foreground focuses on an injured Palestinian with destruction pictured in the background. The image, an Associated Press photo dated Jan. 14, 2009, was originally captioned:  “Gaza City, 14 January: An injured Palestinian man looks on as others inspect a damaged building in the Sheikh Radwan neighbourhood. Ehud Olmert, the Israeli prime minister, claims, he persuaded the US to abstain in a UN ceasefire resolution passed the week before.”

Yet, the photo was recaptioned and republished to accompany a June 17, 2010 Telegraph article on Israel’s blockade of Gaza with no transparency.  The photo was captioned:  “The blockade prevents Gaza from exporting any goods, putting a crippling squeeze on the local economy, and restricts imports to a limited amount of basic humanitarian aid.” A reader would have no idea from this new June 17 caption that the image was, in fact, not capturing the 2010 blockade in Gaza, but was depicting a moment and a man’s injury from Jan. 2009.

Technorati describes Yid the Lid as “commentaries about Israel and being Jewish in a secular world.”   Media Backspin is a blog of “Honest Reporting,” which monitors media coverage of Israel.

The Society of Professional Journalists’ code of ethics advises journalists to “never distort the content of news photos or video.”