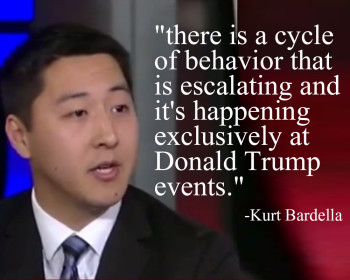 Fields accused Lewandowski of having “grabbed” her and causing her to fall to the ground at a Tuesday campaign event she was covering for Breitbart, as iMediaEthics previously reported. Lewandowski, Trump spokesperson Hope Hicks and Trump himself dismissed the allegations and suggested the claims were fabricated despite Fields’ photo of her bruised arm and an eyewitness, the Washington Post reporter Ben Terris.

Friday, Fields filed a police report over the incident. And Bardella, Breitbart News’ spokesperson, quit, pointing to the Trump controversy as reason.

In a statement sent to iMediaEthics and other outlets as well as on Twitter, Bardella said “there is a cycle of behavior that is escalating and it’s happening exclusively at Donald Trump events.”

Bardella told BuzzFeed  “It would be fair for you to say that” his resignation was linked to the way Breitbart handled Fields’ allegations.

Bardella’s full statement was posted below.

Full @kurtbardella statement on his decision to resign from Breitbart: pic.twitter.com/1HGFUpoXlS

Fields filed a police report with the Jupiter, Florida police department over her allegations, the Independent Journal reported. “The Jupiter Police Department is currently investigating an alleged battery that occurred at 115 Eagle Tree Terrace (Trump National) on March 8, 2016. A police report was filed with the Jupiter Police Department on March 11, 2016 at approximately 10:00AM and the investigation is ongoing,” the police statement said in part.

Earlier yesterday, Breitbart seemingly walked back its defense of Fields’ allegations, suggesting perhaps it was someone else who grabbed Fields.

iMediaEthics has written to the Trump campaign and Breitbart for comment.

Yesterday, Lewandowski accused Fields of being “totally delusional” in her allegations.

@MichelleFields you are totally delusional. I never touched you. As a matter of fact, I have never even met you.