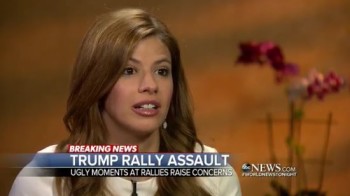 Howley had tweeted questioning Fields’ account, Mediaite reported. He called for Fields to “release video of the incident” and said he’s never had any problems at a Trump rally. “Everyone was very nice FWIW [for what it’s worth],” he tweeted. His tweets have been deleted.

A Breitbart spokesperson told Politico that the news site stands by Fields, suspended Howley for “inappropriate” comments and called for Lewandowski to apologize.

“Patrick Howley was speaking for himself and not for Breitbart News. Senior Management at Breitbart News believes his comments were inappropriate and has decided to suspended him indefinitely effective immediately. Breitbart continues to stand 100% with Michelle Fields and believes that Corey Lewandowski must accept responsibility for his actions and apologize.”

In a March 10 post on Breitbart, Fields explained her side of the story:

“I wasn’t called upon to ask a question during the televised press conference, but afterwards Trump wandered around, stopping at every reporter to take their questions. When he approached me, I asked him about his view on an aspect of affirmative action.

“Trump acknowledged the question, but before he could answer I was jolted backwards. Someone had grabbed me tightly by the arm and yanked me down. I almost fell to the ground, but was able to maintain my balance. Nonetheless, I was shaken.”

Fields said she learned from the Washington Post’s Ben Terris that Lewandowski was the one “who aggressively tried to pull me to the ground” and that she got “no apology” or “explanation.”

Lewandowski should be fired. This is not about Michelle being "part of the story." It's about bad people tolerating thuggery.

Poliico obtained a brief “audio recording of the incident” which “while not definitive — supports the reporter’s version of the events.” Fields tweeted a photo of her bruised arm.

I guess these just magically appeared on me @CLewandowski_ @realDonaldTrump. So weird. pic.twitter.com/oD8c4D7tw3

Trump’s campaign denied the allegations, with spokesperson Hope Hicks claiming in a statement that Fields’ story was “entirely false” and no one else saw it.

Hicks sent iMediaEthics the campaign’s statement, which reads in part:

“The accusation, which has only been made in the media and never addressed directly with the campaign, is entirely false. As one of dozens of individuals present as Mr. Trump exited the press conference I did not witness any encounter. In addition to our staff, which had no knowledge of said situation, not a single camera or reporter of more than 100 in attendance captured the alleged incident.”

Hicks’ statement claimed that neither Fields or the Washington Post reporter “met” Lewandowski and argued that Fields should have complained about the incident “directly first and not via twitter.” Further, Hicks suggested Fields may have made up the story to “become part of the news story as opposed to reporting it,” and seemingly doubted Fields’ allegations of being assaulted during an Occupy Wall Street protest. Politico linked to video of that incident here.

iMediaEthics has written to Breitbart and tweeted Howley for comment.