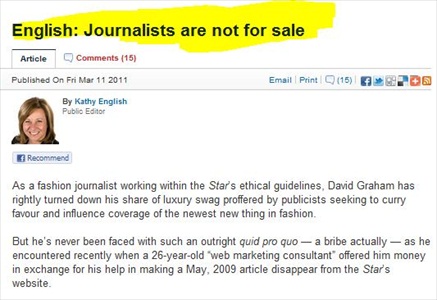 $300 TO REMOVE A STORY? The Toronto Star's public editor, Kathy English, discusses a case where a Star fashion writer was offered a bribe to make a story disappear from the archives. (Credit: Toronto Star, screenshot detail)

Kathy English, the Toronto Star’s public editor, published a 2009 survey about the growing requests for unpublishing — the term for removing a story from an online archive.  But, more recently, she took up a double whammy ethical issue — an incident in which a journalist was offered money to unpublish content.

In her latest public editor column, English told the story of Star fashion journalist David Graham who was reportedly offered money from a “26-year-old web marketing consultant” in exchange for his removing a negative story about the consultant’s client from the Star’s website.

English reported that the consultant told her the client “did not authorize him to offer the Star’s reporter cash to make the story go away — nor was his client aware he had done so.” The consultant reportedly explained to English:

“I wasn’t trying to pay him off, I offered him an incentive. It’s the real world, money talks. Most of the time, people will look the other way.  I don’t talk to a lot of reporters. Maybe I didn’t act with the best judgment.”

English stated: “Certainly this marks the first time I know of that anyone has actually offered a payoff to a Star journalist to make embarrassing news disappear from the web.”

According to English, Graham “has rightly turned down his share of luxury swag proffered by publicists seeking to curry favour and influence coverage of the newest new thing in fashion.”  Journalism ethics codes advise against journalists’ accepting money or gifts in exchange for coverage, or at the least that they disclose any such tangible or in-kind gifts.

English didn’t name the consultant because she wanted to give him “the benefit of the doubt that he really didn’t understand the serious ethical principle involved here: that credible journalists can’t be bought — for any price.” However, she provided enough information where her readers could easily do an online search and find the article.

The story in question was an “almost two years” old Page 1 article, and as English described it, “a relatively trivial piece about a fashion faux pas involving a 30-something Toronto socialite and a fancy red ball gown.”

According to English, if you search the woman in question’s name online, “the Star’s story is one of the first articles to emerge.”

The woman’s father asked the unnamed consultant to “do what he could to make the Star’s story go away.”

StinkyJournalism did a simple Google search of “red dress” and “Toronto Star” and it produced this May 29, 2009 story by Graham about “socialite” Deena Pantalone, who claimed that a locally designed dress was a refurbished vintage dress.

In that article, Graham reported, perhaps presciently, that after Pantalone’s fashion faux paus, “one leader” of the “society types” commented at the time that “Pantalone may hire a publicist to help her with damage control.”

The consultant recently asked Graham to unpublish the story from the Star’s website in exchange for $300.  The offer, according to English:

“Currently my client is offering me $600 to remove the article through advanced SEO techniques, which is more than possible, however a faster route would be contacting you. So I’m asking if you are able to remove an article in question, and if so I would be willing to give you 50% of my payment as it would expedite my work greatly.”

Graham turned the offer down, but English noted that “Had he agreed to such an outrageous request, that would have been a serious breach of journalistic ethics and the Star’s policies, quite possibly a firing offense.”

Likewise, the Washington Post’s former public editor, Andrew Alexander, called for the establishment of guidelines for unpublishing, but did note that a draft of the Post’s updated corrections policy advises against unpublishing in favor of corrections.