#bringbackourgirls Photos NOT from Nigeria, Mislabeled on Social Media, BBC 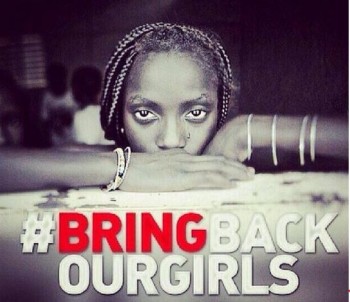 The girl pictured in this photo is NOT related to the kidnapped school girls in Nigeria. The original 2011 image was taken by Ami Vitale in a school house in Guinea-Bissau, but the photo was mis-labeled as part of the #bringourgirlsback campaign.

Social media and two media outlets have used photos from Guinea-Bissau in their coverage of the Nigerian school girls kidnapped in April by Boko Haram.

Most iconic has been the above photo, which shows an African girl staring at the camera with the label #BRINGBACKOURGIRLS. The BBC and CBC both posted the photo in blogs and tweets.

But, the photo had nothing to do with the kidnapped girls.

The original photo was taken by photojournalist Ami Vitale, in a Guinea-Bissau schoolhouse in 2011.

“People trust us to come into their lives, and they share their stories with us, and when their images are used out of context like this, it’s just the worst,” Vitale said to the Washington Post.

Vitale has spent the past week and a half trying to get the mislabeled images taken down from various social media sites, she told iMediaEthics by e-mail. It’s not just the misrepresentation of the image, she pointed out. It’s unfair to the original subjects of the photos to — without their consent — become the face of another issue.

“I have spent the last week and a half since this happened together with my assistant issuing take down notices and writing everyone from Facebook Vimeo, Google, Twitter and hundreds of personal accounts,” Vitale wrote. “It’s been very time-consuming and emotionally draining to try and help people understand that this is not even an issue about copyright or the girls in Nigeria.”

“To use images of real people as if they are just a symbol is really sad. My efforts are simply to protect the people I have photographed and give them the same dignity and respect we would give any human being. I can’t understand how so many of these same people feel it’s okay. I’m pretty sure they would see it differently if it were their own daughter,” she explained.

In total, three of Vitale’s photos were mislabeled through social media in the past month. Above and below, see two of the images. Vitale has successfully gotten the third image taken down from all sites, she told iMediaEthics. “I don’t think that one ever went viral,” she said.

The original version of this image was taken in 2000, Vitale told iMediaEthics. It recently was mis-labeled as a #BringBackOurGirls photo for the kidnapped girls in Nigeria.

“Some people were cooperative, especially if they were in the arts/creative field but much of the general public misunderstood the whole issue and thought it was taking attention away from the girls in Nigeria,” she explained. “I got several very nasty responses from people who did not seem to care that girls images were being misrepresented. For them, it didn’t matter because they were girls from Africa who fit their stereotype of what an abducted African girl might look like.”

“I totally support the girls in Nigeria and agree that we need to focus our attention on them, but this is another issue that is also important,” she told iMediaEthics.

“Is it just because they are from a far away place and fit an image they have of the Nigerian girls?” she asked. “These are 2 separate issues and it’s not fair to assume its okay to do this because of the tragedy in Nigeria. I think we need to apply the same rules and ethics for everyone. There is a double standard here.”

If people don’t comply with her request for a take down, Vitale has had to file copyright complaints.

And, the whole situation has made her wary about publishing her work online.

“I learned that we need much more discussion and education and laws protecting people. With all of this technology, there also has to be a way to electronically encode images so people know where they come from.” She pointed iMediaEthics to the website PLUS Registry, a non-profit she said she recently found out about that should be able to keep track of where images are used throughout the Internet.

“Until we have this, I will need to be more careful about putting images that have a sensitive nature on the Internet,” she told iMediaEthics. “It’s difficult because, on the one hand, I really want people to understand the issues I write and photograph about but at what cost? I got very depressed this past week but now I feel more determined  that we must start educating the general public, not just photographers to understand why they should care.”

How did the Photo Get Misused?

@Imahephzibah apologized in an interview to Mashable.

“I want you all to understand I did not create that image out of malicious intent,” he told Mashable. “I was crying out so that our voice could be heard in Nigeria because it seems our government was not ready to take any action. I credited the source of the image as AlexiaFoundation.org.”

The BBC posted it on BBC’s “Trending blog” but removed it, according to the Telegraph. It also posted the photograph on its @BBCTrending Twitter account.

BBC director of news and current affairs James Harding said that the misuse of the photo caused “a great deal of strain and anxiety in the newsroom that prides itself on its accuracy,” according to the Guardian.  His comments were at the May 16 London Social Media Summit.

Harding went on, “The world has turned into a giant fact-checking machine. You get something wrong, you can hear about it pretty quickly. That can be painful and as you can imagine quite annoying when you hear about it but it’s extremely healthy for journalists.”

“Within minutes of being alerted to the background to this image by the photographer, we removed it from the related blog post on the BBC site.  This is one of the challenges of reporting on social media. We’re vigilant and conscientious about attributing photos and always aim to credit/verify content.”

CBC’s Chuck Thompson told iMediaEthics that the photo was included in a blopost but later taken down.

“The photo was used briefly in a blogpost but was removed quickly when we realised whoever created the graphic mistakenly used the photo,” Thompson told iMediaEthics by e-mail.  “We didn’t issue a correction because the blogpost was about the social media campaign and this graphic was a big symbol of that campaign that many news outlets used in their coverage.”

CBC did, however, publish a May 9 story that reported that the photo was not from Nigeria, “Girl in viral #BringBackOurGirls photograph neither Nigerian nor kidnapped.”

Vitale tries to get photos taken down

Vitale, as iMediaEthics previously mentioned, has devoted much time to informing people they were sharing a misrepresented image.

Some of the people Vitale called out on Twitter for sharing the mis-labeled photos included Ezra Klein, the U.S. Embassy in Madrid and a reporter for The Guardian.

Below, see some of her tweets requesting take downs.

@imahephzibah THIS IMAGE USED WITHOUT PERMISSION! SHE IS NOT NIGERIAN AND HAS BEEN MISREPRESENTED TO USE FOR YOUR CAMPAIGN. TAKE DOWN!

@USembassyMadrid Photo taken & used without permission. You can read more about it in the NYTimes. https://t.co/tUpmx3EP69
— Ami Vitale (@Amivee) May 12, 2014

@EmmaEHoward Your @guardian article on #bringbackourgirls contains a tweet by @chrisbrown with my photo unauthorized. Please remove

The Alexia Foundation, which “promotes the power of photojournalism to give voice to social injustice,” and was the website that had originally published the images in question, also blogged about the misuse of the photos.

“No one should take a photograph from anywhere they find it to use it as they want,” the foundation cautioned. “They shouldn’t. In most circumstances, legally they cannot. What is egregious, however, in this situation is the misrepresentation.”

Ugandan news story on coronavirus 'classic example of how not to report'
Reporting on Suicide in Taiwan: New Law Restricts