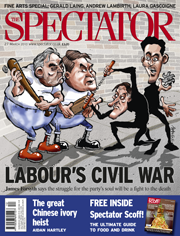 The British Press Complaints Commission is holding a blog to the same journalistic standards as a news entity.

That is, the Spectator is being “censured” for comments by the magazine’s blogger about street crime and race. This is the first time a newspaper or magazine has been censured over a blog, according to the statement on the PCC Web site.

“This is a significant ruling because it shows that the PCC expects the same standards in newspaper and magazine blogs that it would expect in comment pieces that appear in print editions,” Yahoo News reported  the director of the PCC Stephen Abell said.

The blog, written by Rod Liddle for Spectator magazine on December 5, claimed that “The overwhelming majority of street crime, knife crime, gun crime, robbery and crimes of sexual violence in London is carried out by young men from the African-Caribbean community.”

“There is plenty of room for robust opinions, views and commentary but statements of fact must still be substantiated if and when they are disputed. And if substantiation isn’t possible, there should be proper correction by the newspaper or magazine in question,” Abell said in the Yahoo! News report.

“The complaint was considered because it was on a blog of magazine which subscribed and is part of the newspaper and magazine self-regulatory system,” said Jonathan Collett, communications director for the Press Complaints Commission, in an e-mail to StinkyJournalism. “We have had a handful of complaints previous relating to newspaper and magazines blogs but there has either been sufficient remedial action by the publisher or the complaint has not been upheld.  This was the first occasion where we have found an outstanding breach of the Code about a blog.”

While Spectator magazine – and Liddle – argued a blog is supposed to encourage discussion, the PCC statement said the magazine couldn’t publish inaccurately and hope for comments to counter defamations against an entire community.  The blog was found by the PCC to fail the accuracy clause of the Editors’ Code of Practice, which says:

i) The Press must take care not to publish inaccurate, misleading or distorted information, including pictures.
ii) A significant inaccuracy, misleading statement or distortion once recognised must be corrected, promptly and with due prominence, and – where appropriate – an apology published.
iii) The Press, whilst free to be partisan, must distinguish clearly between comment, conjecture and fact.
iv) A publication must report fairly and accurately the outcome of an action for defamation to which it has been a party, unless an agreed settlement states otherwise, or an agreed statement is published.

The PCC wrote on its Web site that there wasn’t enough evidence to prove that either Liddle’s statement was true or that his statement was an opinion.

“These are not new standards applied to bloggers,” Collett wrote in an e-mail to StinkyJournalism. “The PCC’s jurisdiction extends only to newspaper and magazine websites that voluntarily adhere to the Code it enforces.  This is the merely the first occasion on which a complaint against a journalistic blog (appearing on a newspaper or magazine site) has been upheld.   All blogs related to newspapers and magazines which subscribe and adhere to the PCC self-regulatory system are expected to abide by the Editors’ Code of Practice which the PCC enforces in the UK.”

Spectator’s Web site includes its argument  that “blogging was a conversational medium in which readers were able to disagree with the writer’s opinion immediately, as had happened in this case. In that sense, the piece as a whole had been written by the columnist and those who had commented. In addition, it had published a separate blog by another author in which the accuracy of the claim was called into question.”

“A blog is different because it has to be a conversation, otherwise there’s no point in having a blog,” the BBC reported Liddle said.

As citizen media site Agora Vox blogged  “Before all the UK’s bloggers get worried, first of all, there’s no danger of the PCC going round censuring bloggers. To start with, the PCC is only concerned with newspapers and magazines who subscribe to its funding body. Secondly, it can only censure, which is largely name-and-shame, and it cannot impose fines.  However, while Britain has always had libel laws, it would appear that it’s just become a bit harder to defend (inaccurate) commentary by saying that it was an opinion and not a fact. You have been warned.”

The Spectator is a “weekly right-wing magazine,” and will have to publish “an authoritative correction online,” The New Straits Times reported.  As Collett wrote in an e-mail to StinkyJournalism, “The Spectator has published the full adjudication and links on its homepage and to the relevant blog.”

Regarding censure, PCC representative Jonathan Collett wrote in an e-mail to StinkyJournalism:

“The PCC’s greatest sanction is issuing a critical adjudication against a newspaper or magazine. This is a very strong deterrent which effectively acts as a powerful ‘name and shame’ sanction as editors do not like having to publicise their mistakes to their staff, readers and competitors. Under the system of self regulation the publication will then have to publish this text in full on its own pages, with a headline reference to the PCC, and with ‘due prominence’.”

“If the breach is particularly serious (and the Spectator case is not an example of this), the Commission can also refer the editor to his or her publisher. As most editors (and, increasingly, many journalists) have adherence to the PCC Code written into his or her employment contract, a serious breach can have severe consequences in terms of their future employment.”

StinkyJournalism has contacted Liddle and Spectator magazine for comment and will update with any response.