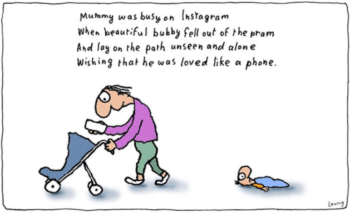 Australian cartoonist Michael Leunig drew a cartoon showing a woman staring at her phone and pushing an empty stroller. Behind her, on the ground, was her baby, who had fallen out.

The caption read, “Mummy was busy on Instagram/When beautiful bubby fell out of the pram/And lay on the path unseen and alone/Wishing that he was loved like a phone.”

Readers slammed the cartoon as misogynistic, but Leunig argued in an opinion piece, “I drew a mother not out of misogyny but because of my lifelong special interest in the mother-infant relationship and all that is at stake in that early connection.” He argued that a mother’s attention is important to baby development and fathers should “protect” that relationship.

He also commented, “Like many others I had been noticing with sadness the growing number of parents lost in their phone screens while wheeling babies in prams through busy streets. Heaven only knows what goes on in the home. Negligence caused by distraction is the issue.”

iMediaEthics has written to Leunig for his response to the criticism.