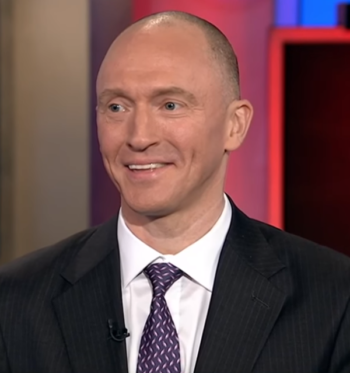 Carter Page, a former adviser to then presidential candidate Donald Trump, is suing Oath, the parent company of Yahoo News and the Huffington Post, as well as the Broadcasting Board of Governors, which runs Radio Free Europe/Radio Liberty.  The lawsuit results from news stories about his alleged ties to Russia; he calls the articles “highly damaging” and “life-threatening.”

Specifically, Page is suing over a Michael Isikoff article for Yahoo News, which he calls “perhaps the most dangerous, reckless, irresponsible and historically-instrumental moments in modern-day sensational crime story journalism.”

Isikoff’s Sept. 2016 article reported, based on “multiple” anonymous sources, that “U.S. intelligence officers” were trying to figure out if Page had “opened up private communications with senior Russian officials.”

Page denies the Yahoo News claim that he ever met Rosneft Oil Company’s CEO Igor Sechin and Russian intelligence official Igor Diveykin. He is also suing over a HuffPost article and a Radio Free Europe/Radio Liberty article that reported on the Yahoo News article. iMediaEthics has written to all of the media entities named in the lawsuit for a response to the accusations. We’ve also contacted Page through the company he founded and for which he remains a managing partner, Global Energy Capital, to ask why he decided to take the matter to the courts.

The lawsuit is uploaded here. In the lawsuit, Page alleges that Oath’s CEO, Tim Armstrong, was motivated by his support for Hillary Clinton and included photos of Armstrong, his wife and Clinton together.

“They printed the allegations including those portions that falsely accused Dr. Page of participating in an alleged conspiracy to commit crimes against the U.S. Democratic Party’s Leadership, not to mention a conspiracy to undermine American democracy and the 2016 U.S. election,” Page’s lawsuit says. Further, Page alleges the reporting prompted death threats against him. Page said he was an unpaid adviser to Trump, that he never met Trump and that he considered himself a private citizen at the time of the stories, and as such, didn’t respond to media requests.

Page’s lawsuit was filed in Manhattan Federal Court and calls for at least $75,000 in damages, the New York Post reported.