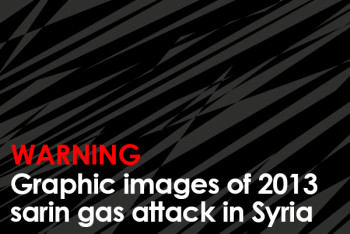 CBS News showed graphic video of a sarin gas attack in Syria in 2013 last weekend but warned viewers online and during the broadcast.

The April 19 report, broadcast on 60 Minutes, “A Crime against Humanity,” showed “more than the minutes of the video captured by cell phones of adults and children suffering seizures, vomiting and gasping for air,” Poynter reported. More than 1,400 people died in the attack, CBS reported.

CBS previously showed “snippets of that video in 2013” but reported out the video and attack in the latest segment. CBS had host Scott Pelley tell viewers why it showed the video in a news video on its website, Poynter added.

“Even though people will be disturbed by what they see, it has to be seen,” Pelley said, CBS News reported on its website.  Pelley asked:

“What would’ve happened during the Holocaust if all the Jews had cellphones? Certainly the world would’ve found out much sooner what was happening.”

Watch the interview with Pelley by CBS’s Ann Silvio about why CBS needed to publish the footage from the attack, for which “no one has been held responsible,” Pelley said.

The video shown by 60 Minutes was “very disturbing eyewitness footage,” Silvio told Pelley. “It shows dying children, people taking their last breath. Why was it important to show that much disturbing footage?”

Pelley responded: “These kinds of things happen in the world too often because people don’t see them and don’t know …why sarin gas is banned by almost every country.”

He went on, “We wanted to stop and show it to the world so people could understand the hideousness of this weapon.”

Pelley added, “You can read about [the effect of the attacks] all day but if you don’t see it, I don’t believe the impact truly hits you.”  He noted that CBS staff “walked out” of editing daily “shaken by that footage all over again.”

“It never was the case that we got used to looking at that footage,” he remarked.

Pelley went on to say “I think we have entered a new era of human rights that are some way safeguarded and guaranteed” because “everyone has a video camera and a way to publish that video.”

“We’ve never seen anything like these sarin gas attacks in Damascus,” he said. “These things have happened and they keep happening because we don’t see it.”

If 60 Minutes gets complaints, Pelley said “these complaints aren’t unfounded. But this is the right thing to do. Even though people will be disturbed by what they see, it has to been seen.”

Images of casualties in war are usually obscured on TV, but not this Sunday. The footage we’ll air is hard to watch, but it must be seen

Before showing the actual report Sunday night, Pelley also said:  “If you have young children watching right now, usually that’s a good thing, but this story is not for them. The pictures you are about to see are agonizing. This will be hard to watch, but it should be seen.”

See the video below.