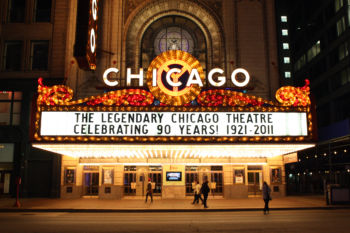 Chicago Sun-Times theater critic Hedy Weiss upset some readers of the newspaper with her review of Antoinette Nwandu’s play Pass Over, which is being staged by the city’s Steppenwolf Theatre Company. Despite the complaints, and a petition to bar giving her free tickets to plays, the Sun-Times is standing by Weiss.

“To be sure, no one can argue with the fact that this city (and many others throughout the country) has a problem with the use of deadly police force against African-Americans. But, for all the many and varied causes we know so well, much of the lion’s share of the violence is perpetrated within the community itself. Nwandu’s simplistic, wholly generic characterization of a racist white cop (clearly meant to indict all white cops) is wrong-headed and self-defeating.

“Just look at news reports about recent shootings (on the lakefront, on the new River Walk, in Woodlawn) and you will see the look of relief when the police arrive on the scene. And the playwright’s final scenes — including a speech by the clueless white aristocrat who appears earlier in the story — and who could not be more condescending to Steppenwolf’s  largely white ‘liberal’ audience — further rob the play of its potential impact.”

In a statement on its Facebook page, Steppenwolf Theatre Company executive director David Schmitz and artistic director Anna D. Shapiro stood by its play and said it was working “on an official institutional response to Ms. Weiss.

“Some of the critical responses from this work have been shocking – not because of the actual critique of the art, but in the way that the responses revealed at best the ignorance of the critic and at worst, a racial bias that, when captured in print, wounded many people of color in this community and their allies, and served as a horrendous reminder of how far we still have to come in terms of racial equity in this community,” the company wrote.

“We denounce the viewpoints expressed in some of these reviews as they fail to acknowledge the very systemic racism that PASS OVER addresses directly,” the company went on. “Particularly egregious are the comments from Sun Times critic Hedy Weiss, whose critical contribution has, once again, revealed a deep seated bigotry and a painful lack of understanding of this country’s historic racism. Her contribution is actively working against the kind of theater we are striving to be.”

The Chicago Theater Accountability Coalition posted a petition on Change.org calling for theaters to stop inviting Weiss for free. “To be clear, we are not calling for a ban on Ms. Weiss attending performances,” the CTAC wrote. “We are simply requesting that she not be given a ticket for free. If she wishes to present her damaging views, we ask that she pay for the privilege.” More than 3,500 people have signed the petition.

In response, the Sun-Times Editorial Board published an editorial  standing behind Weiss and saying it would pay for its own tickets. “Let’s begin by making one point clear: We support our theater critic, Hedy Weiss. She will continue to be a valued critic for the Sun-Times. And we are more than happy to pay for our own tickets to review theater productions,” the board wrote June 23.

The editorial board insisted Weiss was “well-intended” and just missed the mark. Upset readers “read it not as a well-intended critic’s failure to understand the facts of life about crime and policing in minority communities, which might allow room for honest debate, but as a particular white critic’s descent into bigotry,” the board wrote. “This was not the first time, they also complained, Hedy had made such objectionable comments.”

The Sun-Times went on:

“Could Hedy have been more nuanced in her comments? Should her review of ‘Pass Over’ been edited better? Was it tone-deaf? We are all free to complain, defend and debate. But Hedy Weiss is a theater critic of integrity who writes from a place of honest good faith. Nothing she wrote comes close to what Steppenwolf assessed as ‘deep-seated bigotry.’

“What troubles so many of us in journalism, who live and die by the First Amendment’s right to free speech, is to see so many people in the theater community, who also live and die by that right, falling in line to try to keep a critic from doing her job.

“To try to silence a theater critic who is passionate about her work is not healthy for journalism or the theater.”

That said, the Sun-Times noted that it invited Steppenwolf’s Shapiro and Schmitz to discuss Weiss’s review and arts coverage. iMediaEthics has written to Weiss to ask if she participated in that meeting and if she has a response to the criticism of her review and work.

iMediaEthics contacted the theater to ask how the meeting went. Steppenwolf Theatre Communications Director Madeline Long told iMediaEthics by e-mail, “Steppenwolf believes in working for positive, systemic change through the Chicago theater community. As such, we have begun a positive dialogue with stakeholders including ChiTAC, the Sun-Times and League of Chicago Theatres.  In the meantime, Steppenwolf will retain its policy related to comping critics for our productions.”

The Steppenwolf Theatre’s Long also provided a statement from Shapiro and Schmitz saying Sun-Times editors “were receptive to what Steppenwolf and others see as ongoing issues in terms of coverage of the arts, and particularly, theatre in the city.”

Weiss has a history of “controversial political opinions – to put it gently – into her reviews,” Forward noted. “In the past, Weiss has suggested racial profiling, called Tony Kushner a ‘self-hating Jew,’ and has compared the costumes worn by the Munchkins in a production of ‘Wicked’ to concentration camp uniforms.”