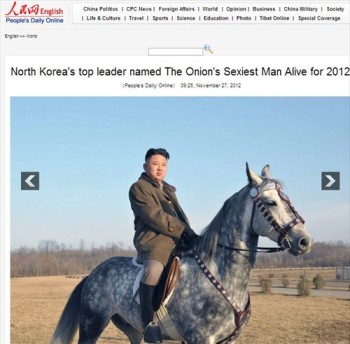 People’s Daily is a daily Beijing-based, Communist Party of China-owned newspaper with a circulation of close to 3 million, according to Mondo Times.

“‘With his devastatingly handsome, round face, his boyish charm, and his strong, sturdy frame, this Pyongyang-bred heartthrob is every woman’s dream come true. Blessed with an air of power that masks an unmistakable cute, cuddly side, Kim made this newspaper’s editorial board swoon with his impeccable fashion sense, chic short hairstyle, and, of course, that famous smile,’ it said.

“‘He has that rare ability to somehow be completely adorable and completely macho at the same time,’ said Marissa Blake-Zweiber, editor of The Onion Style and Entertainment.”

Along with the article, People’s Daily posted several dozen of photos of Kim.

The Onion’s Nov. 14 story notes that “With today’s announcement, Kim joins the ranks of The Onion’s prior ‘Sexiest Man Alive’ winners, including” Bernie Madoff and Syrian president Bashar al-Assad, which Gawker and Buzz Feed both suggested “might have tipped off” People‘s Daily “to the Onion‘s less-than-respectful intentions.”

In an update on its original story, the Onion wrote:

“UPDATE: For more coverage on The Onion’s Sexiest Man Alive 2012, Kim Jong-Un, please visit our friends at the People’s Daily in China, a proud Communist subsidiary of The Onion, Inc. Exemplary reportage, comrades.”

iMediaEthics wrote in October when Iran’s Fars News Agency re-published an Onion story reporting that according to a Gallup poll, “Rural Whites Prefer Ahmadinejad to Obama.”

Fars lifted the story from the Onion without credit, until it apologized Sept. 30 for having “released” the “fake opinion poll…from the Satirical Magazine, The Onion, by mistake.”

Last year, iMediaEthics wrote about the New York Times‘ correction after using a fake cover of Tiger Beat magazine pulled from the Onion. The phony cover pictured President Barack Obama with a pull-out quote reading “I Sing in the Shower.”

iMediaEthics is also writing to the Onion to see if it has any reaction to the People’s Daily report. We’ll update with any response.

“We are pleased that one of our many fine Communist subsidiaries, the People’s Daily in China, has received accolades for its coverage of our Sexiest Man Alive announcement. The People’s Daily has served as one of the Onion’s Far East bureaus for quite some time, and I believe their reportage as of late has been uncommonly fine, as well as politically astute. May our felicitous business association continue for centuries to come.”