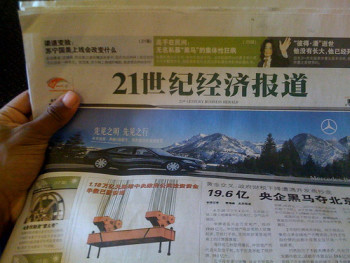 The government “revoked the publishing licenses” site and its weekly newspaper Money Week because of the scandal, China state-owned Xinhua reported, according to Reuters.

The print publication of the 21st Century Business Herald must also re-organize and investigate itself, according to Reuters. The newspaper had a “print readership of about 750,000,” the Wall Street Journal reported, and “was founded in 2001.”

Last year, the government arrested two of the editors for the website for the 21st Century Business Herald and quickly shut down the site, as iMediaEthics reported at the time. China’s State Administration of Press, Publication, Radio, Film and Television investigated the extortion.

That organization is “an executive branch under the State Council of the People’s Republic of China.”

“It directly controls state-owned enterprises at the national level,” the Chinese government website states. That is most media. “Almost all media in China is state-owned,” India Today reported.

In all, “about 30 suspects” have been arrested related to the blackmail and extortion claims, India Today reported. On the other  hand, according to the Associated Press, Xinhua said there were only 21 arrests. iMediaEthics has asked the government group for the precise number of arrests and how many of those detained are journalists.

The government group stated: “Media involved in blackmail have had a vile social impact, seriously harmed public interests, undermined market order and marred the credibility and image of journalists.”

iMediaEthics wrote to 21cbh.com but e-mails bounced back. We’ve reached out to its parent company. We’ve also contacted the State Administration of Press, Publication, Radio, Film and Television.