Chinese Newspaper Apologizes for Photoshopping Taiwan Flag out of Picture

Chinese Newspaper Apologizes for Photoshopping Taiwan’s Flag out of Picture 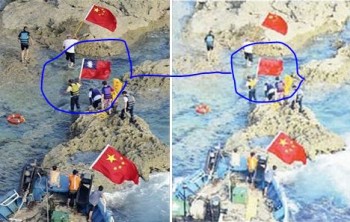 The photo pictured the “arrest of five activists from the Hong Kong-based ‘Action Committee for Defending the Diaoyu Islands’ in Japan,” Shanghaiist blog explained.

According to Focus Taiwan, the newspaper apologized for the Photoshop. The apology, on social networking site Sina Webo, read in part, “We apologized to the readers for our mistake.”

The University of Hong Kong’s Journalism and Media Studies Centre’s China Media Project highlighted the different ways media outlets in China ran the photo in question. In contrast to Xiamen Daily, China’s Global Times and Yimeng Evening Post  “ran the full image – no wily cropping or Photoshopping,” according to China Media Project, but the Chongqing Commercial News ran the photo with “some heavy-handed cropping.”

Another newspaper, the Wuhan Evening Post, placed a “bold black headline…right across the Taiwanese flag,” as did the Daily Sunshine — which China Media Project called a “deceitful, but of course resourceful, workaround.”

But, of the Xiamen News‘ Photoshop, China Media Project wrote that the newspaper’s edit was “taking the lowest of the ethical low roads.”

We’ve written to the Xiamen News for comment and will update with any response.

We’ve written previously about the case of Chinese tiger fauxtographer Zhou Zhenglong, whose photo of a rare tiger years ago were “embraced by local officials who wanted to use them to boost tourism” until they were exposed as phony and Zhou was arrested. The tiger Zhou’s photo showed was the same as one from a poster.  He was jailed in 2010 after breaking court guidelines by trying to find the tiger in question.

Chinese Newspaper Apologizes for Photoshopping Taiwan’s Flag out of Picture