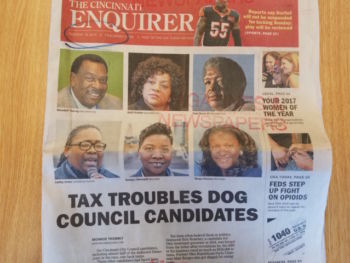 The Inquirer's front-page, via City Beat

The Cincinnati Enquirer published head shots on its front page of city council candidates who had tax liens currently or in the past. Although two of the candidates with tax liens were white, all six of the photographs on the front page were of black candidates.

This unfairly weighted layout upset some readers as well as the city’s branch of the NAACP, which called the front-page treatment “a racially insensitive and divisive hit piece.”

In all, the Enquirer published nine photos of candidates to accompany its story, “Tax Troubles Dog Council Candidates.” Seven of the nine were African-American and two white — but only African-Americans were featured in the front-page spread, the Associated Press reported.

The Enquirer’s interim editor Michael Kilian told iMediaEthics, “We created the perception we were singling out people because of their race, and this proved hurtful to African-Americans who have coped throughout their lives with stereotypical depictions that have reinforced discrimination.”

In a press release, the Cincinnati chapter of the NAACP called for an apology and questioned why the Cincinnati Enquirer reported on a candidate who had a $280.46 state lien, which she paid in 2009. In addition to the NAACP complaint, Kilian told iMediaEthics the newspaper received complaints online from “dozens of readers.” However, Kilian noted that the Enquirer also received messages from “dozens” of readers saying they didn’t think the Enquirer needed to apologize.

In an e-mail to iMediaEthics, Robert E. Richardson, the president of the Cincinnati NAACP, wrote, “We acknowledge the apology. However we are not satisfied.”

“The front-page array of headshots was not the proper approach for either this particular story or just about any story. It resulted from deficiencies in internal controls on this particular day. So stating that the placement of the headshots followed the internal logic of the story – making a distinction between those who still owed taxes and those who had paid – is not a defense of that approach but an explanation.”

Kilian insisted that the newspaper normally vets the backgrounds of candidates by checking public records, and he said that similar stories had appeared in the newspaper during past election seasons. “What we published is what our reporter found in the public records,” he told iMediaEthics.

In a print and online column, Kilian apologized to readers who questioned “our intentions” with the front-page layout and acknowledged it “caused pain to many readers.”

“We are revisiting our internal procedures for vetting online and print content,” Kilian added. “We have had and will have many conversations, internally and externally, about how we do better in the future. And we will engage with and listen to people who want to be heard.”