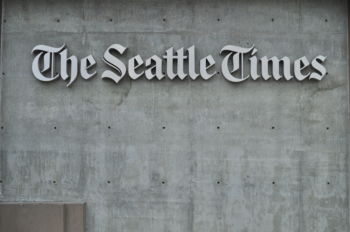 The Seattle Times is being sued for libel over a Pulitzer Prize-nominated series that reported on a local neurosurgeon. The Seattle Times special investigation “Quantity of Care” looked at Swedish Health’s Cherry Hill hospital, which was acquired by Providence Health & Services in 2011.

The neurosurgeon, Johnny Delashaw, resigned after the Times‘ reports about his practice, but claims the reporting was false. Washington state’s Medical Quality Assurance Commission suspended Delashaw’s medical license last May, but the Times noted in its own story on his lawsuit that he is appealing the suspension.

The April 11 lawsuit, filed in U.S. District Court, called the Times’  Feb. 2017 reports “sensational” and “false.” The Times reported that “Before filing the lawsuit, Delashaw had never requested a correction. Nor had Swedish.”

Delashaw is also suing another doctor, Dr. Charles Cobbs, whose memo to Swedish Health’s CO was quoted in the article, related to the Times investigation.

The Seattle Times provided iMediaEthics with the following statement from its president and CFO Alan Fisco, which reads: “We stand by the accuracy of the ‘Quantity of Care’ series. As this is a legal matter, we will have no further comment at this time.”

Swedish’s communications director Mary Beth Lowell told iMediaEthics, “Swedish is aware of Dr. Delashaw’s lawsuit against The Seattle Times and Dr. Cobbs. Swedish is not party to the suit. At this time, we do not have a comment on this matter.”

“The main factual assertions in these articles, and the overall thesis and message conveyed by the articles, were false, defamatory, and caused serious damage to the reputation and career of Dr. Johnny Delashaw, injured patients who needed his care, and damaged the quality of health care in the Pacific Northwest,” the lawsuit charges.

For example, the lawsuit says that in contrast with the Times‘ reporting that Delashaw “was paid based on the volume of surgeries” causing him to do “concurrent surgeries,” instead “Delashaw was on salary” for most of his employment and didn’t do “concurrent surgeries.” Delashaw’s lawsuit claims the Times‘ “approach to its ‘investigation’ was to omit any information that did not fit the accusations it was determined to make.”

“The Times committed the very sins it purported to uncover: in an effort to generate readers via sensational press, the Times sacrificed truth for accuracy, leveling catastrophic blows on Dr. Delashaw, his reputation, his finances, and his patients,” the lawsuit claims.

The lawsuit notes that Delashaw denied the claim of concurrent surgeries before publication.

iMediaEthics has written to Dr. Charles Cobbs’ attorney, Malaika Eaton, who called the lawsuit without merit and “an act of desperation.”

“Dr. Cobbs will not be deterred by bullying or intimidation,” she added. “He will testify.  And he will continue fighting for the good of Swedish and for patient treatment and safety at Swedish.”