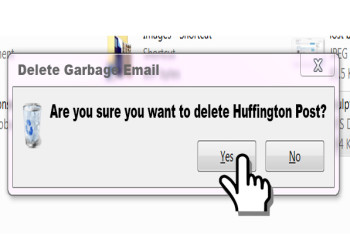 .All hell is breaking loose in Gaza, Ukraine and Syria and … but you wouldn’t know it from the Huffington Post’s “The Morning Email.” Kim Kardashian’s bikini tanning features among similar “Top Stories.”

However, the headline that really made me almost lose my breakfast was: “Sex Toy Stuck In Woman’s Vagina For 10 YEARS.”

Yet the subject line for the HuffPost e-mail contained hints that a serious story was being flagged (“Friday’s Morning Email: No Survivors in Air Algerie Crash”), so it seemed safe to open. But no luck.

I was victim to the junkification of news. Alas, my email subject-line crash story was only a Huff Post’s bait-n-switch.

Under the banner, the Pulitzer Prize-winning news site’s rotating headlines featured “Kim Kardashian is all about bikini tanning time” and “Cher hated one of her biggest hits.”

Here is the gif with the multiple headlines pushing readers’ clicks in my email this AM.   Also, see the newsletter email as I saw it in my in-box.

So how are the shameless headlines about Kardashian’s tanning and Cher’s feelings about an old hit — one that’s surely more antique than my oldest pair of socks — top news stories for Huff Post’s Morning Email? And what about the Algerian crash not being included under the top banner, as teased in the e-mail subject line?

To be fair, there was an international news story included:  “Queen Elizabeth Photobombs A Selfie, Is Infinitely Cooler Than Everyone.” See screenshot image below:

Believe it or not, a byline was included with this e-mail, a veritable case study in the crumbling of journalistic news standards into junk journalism. Don’t sign up for The Morning Email unless you like junk news about, say, vaginas first thing in the AM.

The e-mail states “By Lauren Weber with Eliot Nelson” at the top, just under the rotating headline of Kim, Cher, et al.

iMediaEthics wrote to Huff Post’s Morning Email’s Weber and Nelson and heard back from Sujata Mitra, Director of Communications, News and Politics.

“The ‘top stories ticker’ in The Morning Email is an automated feed of the most viewed stories that are currently on The Huffington Post. Our editors and reporters do not choose the stories that appear in this ticker.”

However, Huff Post editors certainly select the posts –such as “Sex Toy Stuck In Woman’s Vagina For 10 YEARS” –that later are automatically selected from among most viewed?

All the more reason to click delete when the Morning Email appears.

UPDATE: July 28,2014: 9:49PM EST  –Correction: According to our editing records, an error was inserted by an editor that briefly made it through to publication. When a second editor reviewed the story, shortly after publication, he reinstated the original, correct  sentence. We wrongly stated The Huffington Post e-mail newsletter did not include a news item about the Algerian plane crash. We regret the error.